On the Field | WMU Alumni Skip to main content

There are a number of ways Western Michigan University elevates on the field; ensuring academic success is just one example of how we work to enhance the Bronco student-athlete experience.

In the last year, Bronco Athletics has celebrated a lot of victories:

But they’ve also celebrated some victories off the field, because at WMU, succeeding in academics is just as important as athletic success for student-athletes. 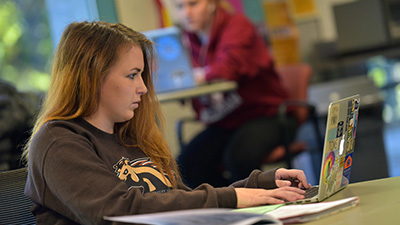 “We really want our students to be successful, in athletics and academics. We see that a lot of people have hopes and goals of making it pro, and it’s really hard to do that,” said Ashley Williams, assistant athletic director of academic affairs. “We want them to get a degree and leave Western being able to contribute to society, to their families, to be in a position to be on their own, and work in a field that they want to be in.”

The proof is there. Across WMU’s five fall sports in 2018, the Broncos produced 16 MAC Distinguished Scholars Athletes; 52 Academic ALL-MAC selections, four Academic All-District Honorees, and an Academic All-American. Football (20) and men’s soccer (9) each led their respective sports with the most Academic All MAC Selections.

Additionally, January 2019 saw 36 football players on the dean’s list, and women’s gymnastics had the second highest combined GPA in the nation for the 2017-18 academic year.

The staff at the Ellis Athletic and Academic Advising Center works to make sure good grades are a reality for student-athletes. At the end of the day, the goal across all of athletics is to ensure that student-athletes have what they need to navigate difficult schedules. This is why all freshmen are required to use the center and participate in study tables.

“The time you have is so different from high school. Your classes are all over the place—and student-athletes have so many other practices and commitments and meets,” Williams explained. “It’s good to be required to be here, especially during the first year to develop those time management skills—across all levels of students.”

Staff members also review student transcripts, so they know in advance if a student may be struggling and require extra help with study skills, prioritizing time, or tutoring.

On top of that, the center offers an array of services for all student-athletes from study tables, tutoring, advising, and basic support systems. In addition to requiring academic advising each semester, which the center helps to coordinate, staff communicates with coaches regularly and encourages students to be engaged.

“We refer student-athletes to other services on campus, too,” Williams said. “We encourage them to talk with their professors, sometimes they are hesitant, but our faculty is really great here, they really want students to be successful.”

“It’s important to help them stay successful. They have the opportunity to get an education, so when they’re done with their sport they can be successful elsewhere.”

Ensuring academic success for student-athletes is just one example of the many ways WMU is working to elevate the athletic experience. Click below to view other areas where you can make difference for Bronco Athletics.

Elevate with a Gift