Abby Raymond – How Aviation led to “Rags” and Riches

When you seek some mentoring for your intended career path, be like Abby Ragsdale and get it from the top.

Early in her days as a student at the Western Michigan University College of Aviation, the former Abby Raymond landed her first job in the industry working in the office of Dean David Powell. "This position instilled in me a good work ethic and a commitment to customer service."

"Dave gave me a lot of great advice in advancing my career," says Ragsdale, who earned her bachelor's degree in aviation science and administration in 2011. "He was one of the biggest supporters for my success in aviation," which is why Powell earns her nod as her "favorite" among the pantheon of helpers during her tenure at WMU. 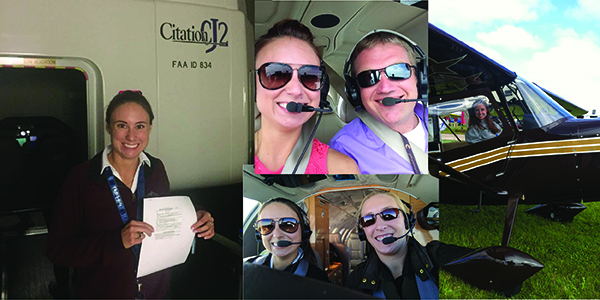 And she picked a good role model. Powell, who joined the Air Force after his graduation from Arizona State University in 1975, parlayed that experience into chief-pilot and administration duties for United Airlines' operations at Chicago's O'Hare Airport, Miami International Airport, and San Francisco International Airport. He joined the College of Aviation in August of 2003 and became dean in July of 2008.

Ragsdale is making her "success" march as well. Since August of 2019, she has been flying for the aviation department of Steelcase, a century-plus-old enterprise headquartered in Grand Rapids that, with 12,000 employees, has grown far beyond its origins as a maker of office furniture and equipment.

Not bad for the former Novi, Mich., resident who graduated from Northville High School in the southeast part of the state in 2007. "I have always been interested in aviation," she says. "By the time I turned 18, I knew I wanted to fly and be involved in that world. Growing up, our family traveled for vacations, so naturally I had a fascination for airports and airplanes. Aviation is also in my blood. Although I never got to meet him, my great-grandfather was a recreational pilot who owned an airplane."

She says that Western was always No. 1 as her higher-education choice because of its aviation program. "The main campus is beautiful and I really liked the Kalamazoo area. I have never been happier with that choice."

Ragsdale regarded herself as something of a shrinking violet at first, but that all changed under the aegis of the College of Aviation. "I have met so many amazing people at WMU, many of whom I am still close friends to this day," she says. "I have lots of wonderful memories. My favorite is my first solo. That gave me so much confidence and it validated my decision to go into aviation."

Proving the adage that sometimes it takes a village to produce a pilot, Ragsdale joined the WMU chapter of the aviation-student fraternity Alpha Eta Rho and advanced to serving as its vice president her senior year. "I had always been a shy person," she recalls, "and Alpha Eta Rho brought me out of my shell. I made life-long friends and it was an excellent opportunity to learn how to network."

Academically, she enjoyed such classes as aviation safety, crew resource management, corporate aviation and the flight labs. "I did face a few challenges with my confidence and believing in myself during flight training. With the help of some amazing flight instructors, I was able to overcome those challenges. They all made me into the pilot I am today." And, of course, there was always Dean Dave Powell to offer some counsel.

All of this led to other steps up the aviation-career ladder. She became a Western flight instructor the year after her College of Aviation diploma went on the wall. "This position not only helped me increase my skills as a pilot," she says, "but it took me to the next level as a professional."

Over the next three years, Ragsdale taught private-pilot and commercial multi-engine courses for the college, which also provided a personal pathway to become involved in corporate aviation and contract flying, operating first out of Kalamazoo. In 2015, she moved back to the Detroit area and started flying full time as a second-in-command out of the Pontiac airport. By 2017, she earned her captain's rank as a contract pilot, which prepped Ragsdale for her current duties at Steelcase. "I gained so much knowledge and confidence during this time," she says, "and I had a ton of fun."

She wants those who follow in her contrails to experience that "fun." "I think it's very important to give back to aviation and to WMU," she says. "Western did a lot for me. Because of its incredible aviation program, Western provided a great education. I'm very proud to be a Bronco." She believes those three years of teaching aviation courses was one way of "giving back." "All of my former students, in one way or another, are succeeding in their careers, and I'm so proud of all of them."

Ragsdale has also taken part in a symposium for women interested in aviation careers. When she looks at those looking back at her, she can see herself just a few short years ago. She also enjoys connecting with women who preceded her in the aviation industry and learn the lessons that came their way.

Since the fall of 2018, flying is now "All in the Family." That's when she married husband Matt, who is also a College of Aviation-trained pilot. And during their honeymoon in Hawaii, they have added scuba diving to their list of commonalities. They recently tested their underwater skills in the Caribbean waters around Bonaire off the coast of Venezuela.

They call the area north of Michigan's state capital of Lansing home these days. That's where Ragsdale and her husband, when not in the sky, fill the air of their residence with the aroma of gourmet recipes and baked goods as "foodies."

Life can be good in the aviation industry.