Jason Anthony grew up in the vicinity of where he would polish his employment credentials.

But it wasn't an exact route to Battle Creek's W. K. Kellogg Airport for the 2007 graduate of Gull Lake High School.

There was a bit of a detour -- seven years worth -- when the Kalamazoo-area native wore the colors of the U.S. Navy.

In the latter case, he was following in the footsteps of his dad who retired from military service an an operator of heavy equipment.  While Anthony initially had his mind set on becoming a Navy SEAL, the family legacy of being sort of a Mr. Goodwrench -- and his father's counsel -- led him toward the field of avionics. 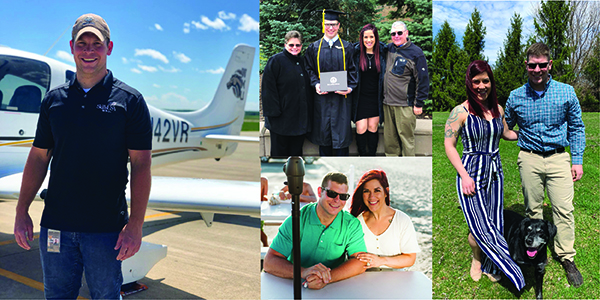 For the uninitiated, avionics encompasses the electronic systems used specifically in aircraft, but also in artificial satellites and spacecraft.  Avionics touches the world of communications, navigation, the display and management of systems, and the controls that perform individual functions in aircraft.

That was Anthony's focus from December of 2008 until his discharge in April of 2015 when his journey took him to the WMU College of Aviation that is based at what is now called the Battle Creek Executive Airport at Kellogg Field.

As a naval avionics technician, he worked on F/A-18s, learning how to perform scheduled inspections on its electronic systems.  His duties included troubleshooting when it came to advanced radar, communications, navigation and weapons systems "to keep the aircraft combat-ready."

Destined to earn a degree in 2018 in aviation maintenance technology, Anthony was well-school enough in his trade that, while at Western, he interned for more than two years at Stryker Medical Corporation as a "plane cleaner and line tech."

"I learned how a corporate aviation department functions on a daily basis," he says.  "I was able to perform a variety of maintenance and line-service tasks on a regular basis."

All of which adequately prepared Anthony for his current post -- being one of the 45,140 "Good Hands People" employed by the Allstate (Insurance) Corporation.  As a technician, he is responsible for two aircraft in Allstate's fleet.

Anthony was not your typical fresh-faced student after the ink dried on his Navy discharge papers.  While he knew avionics inside and out, he believed he needed to learn more about aircraft engines and the science of flying. Close to his Gull Lake home was the College of Aviation with its "reputable" program in aviation maintenance.  Family and friends would be close by if any support was needed for the veteran.

Easing the way for Anthony was what could be rated as the best piece of legislation in the history of the United States -- the G.I. Bill.  Not only did it help meet the cost of a degree, but the assistance allowed him to pursue another aviation goal -- qualifying for a private pilot's license.

As a youngster, he says he always enjoyed the flights to destinations for family vacations.  As a young adult, the technical "why and how" of flying intrigued him.  The next step in his natural compendium of learning is to be in the cockpit.  In his job, Anthony makes certain that folks can safely go off into the wild blue yonder. One day, as a pilot, he will take them there.

Reflecting on his pre-Allstate days, Anthony highlights as his favorite the college's class in advanced airframe systems where he says he learned "intricacies of complex aircraft systems.  "We were challenged to focus on the individual parts and pieces that make these systems operate smoothly.  The class developed my troubleshooting skills and techniques."

Standing out as an instructor was faculty specialist Jeremy Hierholzer.  "He had the unique ability to challenge me in the classroom and convey the course material in a way that allowed me to imagine myself in a real-world setting.  He developed my decision-making skills that I now use daily."

Anthony's participation in the college's SkillsUSA program also built his talents as well as establishing fond relationships with fellow students.  Those interactions with peers, faculty and staff made -- pardon the pun --  time fly by in his Western days.

Today, it appears that Anthony always enjoyed a smooth glide path.  Not so inside his skin.

"I had no idea where I was heading after college," he recalls.  "There were some opportunities at service centers and commercial airlines, but I had a different vision in mind.  I did know I wanted to be part of a corporate aviation department."

That sent him on a search-and-create mission as he began networking and scanning the horizon.  Because he had taken advantage of scholarship opportunities, which helped land the internship with Stryker, Anthony had a few more irons in the fire than your typical grad.  The Stryker experience also brought him into contact with professionals in the field.

And here's how it all worked out.  Greg Hamelink, his mentor at Stryker, was "at an annual inspection visit with one of the company's planes," Anthony says, "when he talked with a technician from Allstate and was told about a job opening."  You know the rest of the story, and Anthony was on somebody's payroll literally minutes after graduation.

Networking is a powerful and valued force, but, in Anthony's eyes, something more is required.  "There surely is a shortage of professionals in all facets of the aviation industry," he says.  "An open mind and a willingness to 'go where the work is,' along with a drive to learn, will help an individual become successful."

The "drive to learn" remains in Anthony's portfolio.  "I have found," he says, "that being an aircraft technician makes me a better pilot and vice verse.  As I log each day toward my inspection authorization, I am also building flight time toward a commercial pilot's license in my off hours.  I guess you can call it 'wrenching until I can fly for a living.'  That is eventually what I would like to do."  How about that -- as an airline or corporate customer! The guy can not only fly it, he can fix it.

As with all of his fellow College of Aviation alumni, the quest is not over.  Supporting the industry and WMU's program is almost mandatory post-graduation.  "The technicians, pilots and operations personnel being produced are vital to their employers and the nation," he says.  "It is essential that they be properly trained and educated before joining the workforce."

Anthony participates in fund-raising events for the College of Aviation's student organizations so that their members can network, take part in competitions, earn scholarships, and avail themselves of all kinds of opportunities.

Anthony, who when he marries his fiancee Raisa will no longer be flying solo, stresses the importance of having "mentors who will push you to succeed and also having a reliable support system of people available personally and professionally."  On that team, he says are Hamelink, pilot mentor Jim Winters, and his bride-to-be.

As some say, while it may take a village to raise a child, it takes more than one person to get a plane off the ground.