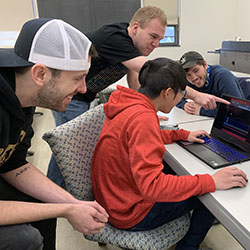 Pac-Man is back for a new generation, but this time, Western Michigan University students are telling Inky, Blinky, Pinky, and Clyde when and where to get their yellow nemesis. And they're doing it for credit towards their computer science degrees.

Students in CS5950 Game Development collaborated in the fall 2019 semester to create a reproduction of the 1980 classic arcade game using Pico-8, a game development platform. While it sounds like all fun and games, as instructor Colin MacCreery says, “Math is behind everything.”

Josh Chandler, a recent WMU computer science graduate who is now studying for his master’s degree in computer science, says the one-credit class allows students to use their programming skills to create something tangible.

Chandler, who is president of the computer club and helps MacCreery teach the class, says the course is flexible and can be altered from one semester to the next in response to the students’ interests. This semester, students are creating original games on the platform of their choice, such as Game Maker, Godot Engine, Unity, and Unreal Engine. MacCreery, Chandler and the students have created a collaborative atmosphere where there are no dumb questions and, inevitably, someone will know the answer.

Currently, all students enrolled in CS5950 are computer science majors, but MacCreery dreams of a day when students from other majors get involved to widen the creative knowledge in the classroom. “We’d welcome students who are into art, music, 3-D modeling,” MacCreery says. “You do not need to be a computer science or even engineering major.”

Steve Carr, chair of the Department of Computer Science, says the class offers students a unique way to use their emerging computer programing skills. “The class is an opportunity for students to put what they’ve learned in other classrooms to use in a different way,” Carr says. “For students who are into gaming, what could be better than creating their own game?”

First-year computer science major Philip Yong agrees with Carr, saying that with game programming, “you see something you create come to life.”