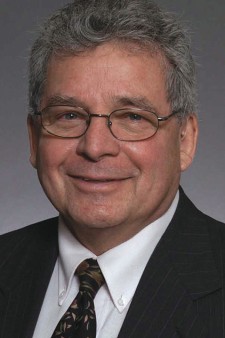 Fred Sitkins decided to attend Western Michigan University after it was recommended to him by a teacher from his home town of Wyandotte, Michigan. "I shall never forget being dropped off by the campus bus and standing in front of East and North halls to attend my first class. That remains a vivid image," Fred recalled for his wall of honor story in the new alumni center.

"I made life-long friends as a member of Sigma Phi Epsilon, became an RA (known then as a staff assistant) in Smith Burnham Hall, was elected to the Men’s Union Board, and several other campus committees and professional organizations."

Fred graduated from Western in 1959 with a Bachelor of Science in Industrial Arts and went on to teach in three school districts and a community college before joining the industry and establishing his own manufacturing business.

"Upon the sale of my business I considered retirement. My wife Chris found that the WMU Mechanical Engineering Department was looking to fill a two-year temporary appointment. My ego suggested that it would be nice to teach at your alma mater – even for a short time."

Fred's interests were in advanced manufacturing techniques and robotics and motion control. He taught a variety of Industrial and Manufacturing Engineering courses at WMU while guiding students and creating noteworthy relationships between the industry and the College of Engineering and Applied Sciences. He was also an active Gary Fund volunteer for many years, the athletic faculty representative, and was named W Club 'Man of the Year' in 2010.

In the fall of 2015, thirty-six years after returning to WMU as a faculty member, Fred retired from WMU but remained a part time instructor. He passed away on Saturday, November 7, 2015 from medical complications. Known by many and respected by all, a memorial fund has been established in Fred's name, so that students can continue to be inspired and motivated by his legacy.