As a student, Bill Brown (’53) played football under Coach John Gill and graduated with a degree in business. As an alumnus, Bill went on to enjoy a long and successful career and a close relationship with WMU, serving in many roles including on the WMU Foundation Board. Read Bill’s recollection of gratitude for WMU. 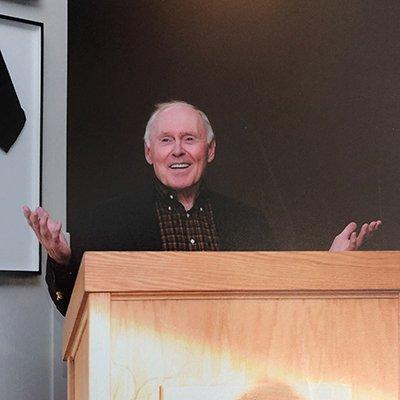 I attended Maine Township High School that served the Chicago Suburbs of Park Ridge, and Des Plaines, Illinois, and graduated in 1949. I was admitted to Ripon College in Wisconsin, and planned on matriculating there, but a close grade school and high school friend, Chuck Higgins, invited me to take a drive to Kalamazoo with his uncle, a Western graduate.

Chuck and I toured the old campus, the new West Campus, and Waldo Stadium. We were enamored with everything we saw, applied for admission in September 1949, and were accepted. Chuck and I became the first occupants of Room 333 in Smith Burnham Hall, a 100% men's dorm during our time on campus----darn it!

We were both walk-ons to Coach Tom Slaughter's 1949 freshman football team (freshmen were not eligible for Varsity in those years). Chuck won the starting quarterback role, and while I made the squad, it was as a second string running back.

Our Senior year was quite different, and very rewarding. Chuck was elected Captain at the beginning of the season, and my teammates voted me the most valuable player at the conclusion of the season. Head Coach John Gill retired after our last game. He never had a losing season during his many years coaching at his Alma Mater. Significantly, he was not only a fine coach, but a true gentleman in all respects.

Following graduation, I spent my next two years in The United States Air Force fulfilling my mandatory military obligation, and then began my career as a trainee at Arthur Rubloff & Co, a commercial real estate company located in downtown Chicago. The training program lasted six months, and then I became a broker in the Industrial Department selling and leasing manufacturing and warehouse buildings in Chicago, and surrounding suburbs.

Thank the good lord that I was single because the scramble for business with competing firms was fierce, and it was tough sledding for me the first two or three years. Fortunately, my parents provided me a rent-free room in their home until I married in 1960. I worked hard, learned my business, and found success. Eight years after starting with the company, I was named the Director of the Industrial Division, asked to join the Executive Committee, and subsequently elected to the Board of Directors.

When our Chairman and Executive Vice President both reached the mandatory age of 65 for retirement in the same year, I was elected President and Chief Executive Officer, and one year later elected to the additional role of Chairman of the Board.

Arthur Rubloff & Co was one of the dominant commercial real estate firms in Chicago at that time, but the business was changing rapidly with three national commercial firms providing strong competition with their ability to represent corporate clients throughout the United States.

When I was promoted to CEO, I was well aware of the changing environment in the industry, and retained the services of a Management Consulting Firm from Boston to help create a strategic plan for the national, and subsequently international, expansion of the company. Shortly thereafter, we opened branch offices in Washington DC, Atlanta, Houston, Los Angeles, and San Francisco. We also formed a Joint Venture with a commercial real estate firm headquartered in London. They represented pension funds in Great Britain and on the European Continent. All were interested in acquiring income producing office buildings, and shopping centers in the United States.

This venture was a failure. Rubloff submitted high quality investment grade office buildings and shopping centers located in prime US markets that were on the market for sale through our English partner, and they in turn presented the purchase opportunities to managers of the European Pension Funds our English partner represented. All were piteously slow in their evaluation of the opportunities presented, and by the time they were ready to commit to purchase, the properties had been sold.

Soon after it was clear that our Joint Venture was not going to work, I was approached by a New York Investment Bank who represented an undisclosed major foreign capital source interested in purchasing an interest in a national commercial real estate firm that had the capability to develop prime location office buildings in the United States for their investment portfolio. I responded favorably to the inquiry, and soon was on a flight to Tokyo, to meet the CEO of Orix who were the Japanese equivalent of General Electric Capital in The United States. I then met with the their Executive Committee for two very full days, and it became clear to all that major benefits would accrue to Rubloff and Orix if we could agree on a deal structure. Instead of a Joint Venture, a sale of 23% of our company was negotiated at a very favorable price for our existing shareholders. This venture did not fail, and in fact was highly successful by any measure. They sent one of their high-level employees to office full time with us in Chicago, which clearly expedited the approval of proposed real estate development opportunities. All the employees of Orix that I met were all very smart, all with a great sense of humor, and it was one of the finest chapters in my business career.

About four years into the venture, it was clear that Orix had little interest in the high volume but low profit margins provided by the property management, commercial brokerage, consulting, financing or the appraisal divisions of Rubloff, Inc, so a friendly negotiation split the company into two elements. Orix purchased 100% of the Development Division, and remainder of the company was sold to CBRE, a New York Stock Exchange international commercial real estate service company. Essentially, I sold myself out of job.

I have been involved with my Alma Mater in many capacities since graduation: I helped organize The WMU Alumni Club of Chicago, and served as the first president, served on the Board of Directors of The National Alumni Association, and spent several years as a member of The Board of Directors of The Western Michigan University Foundation, including two years as chairman. It has been my pleasure to contribute financially to the football, baseball, and basketball programs, The Haworth College of Business, and The Presidents Fund over the many years since graduation.

Life takes many twists and turns. Some good, some not. If we learn from our mistakes and try not to repeat them, success usually follows.

Hard, but enjoyable work, honesty, and integrity represent the roadmap to a successful life no matter the profession. I have a deep sense of gratitude and appreciation for what Western Michigan University has given to me as a student, and as an Alumnus.

My WMU roots are deep, my cup runneth over.