Getting a Superb Education in Kalamazoo

When I arrived at Kalamazoo in 1964 I had no idea just how much seven years in this comfortable Midwestern city would shape my life.

An indifferent high school student, upon completing community college in Grand Rapids I went west and worked as a deck hand on a Swedish freighter crossing the South Pacific. After five months of week after week, $100 per month physical toil, I realized the value of higher education and was ready to study.

Fortunately, one of my first classes at Western was economic development with Lou Junker. Lou was a maverick, a pioneer nutritionist, with a passion for learning and making the world a better place. And because of this class and my experience handling cargo in international trade, I committed to studying economics.

Lou Junker provided a theoretical foundation to practical economics.  He was an institutionalist and stood apart from the rival Keynesians and neo-classicists. He ruffled feathers and challenged conventional thinking. Rejecting my timid response to his question of how many books I read each week, Junker put me on a study program—economics, anthropology, history–and then monitored my progress.

Because Milton Friedman, Kenneth Boulding and other luminaries came to speak at Western, ideas sprang from the right and left. The mantra was free speech, everything goes, and think for yourself.  My first semesters at Western were intellectually exciting.

Luckily, I connected with passionate, smart professors who required hard work and thinking. By now I understood the value of general education and took advantage of outside events.

From political science I learned about constitutional law and parliamentary democracy, got turned on to classical music  from Kalamazoo Symphony cellist Herbert Butler who  taught music appreciation.

My interest in architecture began with historian Peter Schmidt’s lectures on Victorian homes in Kalamazoo. Bob Dye’s year-long seminar on the films of Ingmar Bergman made a huge impression, so much so that I spent a summer in Stockholm absorbing what I could of that vibrant, brooding north European culture.

I became enamored of the arts. Nearby Nazareth College devoted a semester to the stunning Kenneth Clark Civilization series that had been popular on public television. I became a regular at the springtime Kalamazoo College Bach festival. Once when seated on a bench on the K College quad, composer and artist in residence Aaron Copland wandered past. We talked for ten minutes.

Twice I represented Western at collegiate conferences at the United Nations. There were the intellectually challenging graduate seminars at Oxford and in Yugoslavia. The latter was my first exposure to that still remote, mildly exotic Slavic world. Visiting six Yugoslav republics and Kosovo over a five-week period in 1967, there wasn’t one scholar who imagined that 30 years later their country would disintegrate into horrific ethnic conflict.

Because I was interested in South Africa, when drama professor Zack York was casting his adaptation of Alan Paton’s Cry the Beloved Country, I auditioned and got a major part in the first play staged in Western’s Laura Shaw Theatre.

I was fortunate to be in Kalamazoo during what might be called the cultural revolution of the turbulent 1960s. So many things were new and exciting. Stereophonic sound was electrifying. Later Beatles music opened closed minds. Food coops and organic food were revelations, sensible and cheap. Rock and roll was pervasive and anti-war protests constant.  Jane Fonda, William Kunstler and Alan Ginsburg all spoke on campus. Yes, the country was divided but for the most part debate was constructive and healthy. 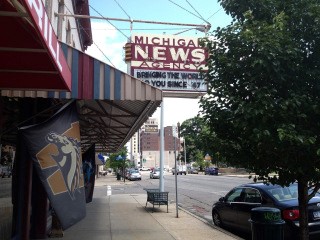 As a vibrant college town Kalamazoo rivals Ann Arbor and surpasses most Midwest locations. Because Upjohn, now Pfizer, was headquartered in Kalamazoo, the city attracted educated, enlightened people from all over. The downtown mall was the nation’s first and on its fringes were funky book stores, bars and restaurants. Michigan News remains as it was and there’s a fine common-folks restaurant next door where the Char Steak used to be, remnants of an earlier time.

probably learned more from conversations and music evenings at Vern and Margaret Berrys’ Victorian home on Elm Street than in many classes. The Berrys raised five children there and took in foreign students as well. Margaret’s percolator was always ready with cup of coffee. There was Indian food and interesting people. Doors were always open. Artists worked in the carriage house in the back. The Red Clay Ramblers from Chapel Hill played in the parlor.

Most of all Kalamazoo stood out for its wonderful people, many of whom from are still there. Times change but Kalamazoo remains a special place where one can get a superb education. #

Writer and journalist Barry D. Wood is the Washington, DC correspondent for Hong Kong radio and is author of Exploring New Europe, a Bicycle Journal. His website is econbarry.com.