One of the common threads that unites human beings is our capacity to embrace multiple passions throughout our lives. We contain multitudes, and perhaps no one exemplifies this trait more than members of our own Bronco family. Christopher Hodshire (B.S.W.’98) has set the bar for leading a life of variety and purpose. From teaching social sciences at the collegiate level, to leading critical community initiatives, and even breaking into the screen acting profession, Hodshire’s career has been nothing short of exciting.

After graduating from Union High School in Dowagiac, Michigan, Hodshire went on to enroll at Southwestern Michigan College, followed by the University of Michigan, and finally at WMU, where he graduated from the Department of Social Work in 1998.

Hodshire has years of experience as an educator and consultant within the field of social sciences. Following his graduation from WMU, Hodshire worked on campus as an adjunct professor in the Department of Social Work before accepting a position as a visiting lecturer at the USM—Universiti Sains Malaysia. Near the end of his year teaching abroad, he was the keynote speaker for the Malaysian Association of Social Work’s first national convention in KL City, in conjunction with the organization’s 40th anniversary.

In addition to his career in education, Hodshire has also led several community initiatives which focus on the importance of international diplomacy and cultural exchange. Currently, Hodshire serves as the Chair of the Asan/Lansing Regional Sister Cities program with the country of South Korea, and has served on the LRSC board for more than 15 years. The mission of the program is to connect Lansing to the rest of the world through a network of global citizen diplomacy. Throughout the course of his tenure there, Hodshire served in dignitary roles for a number of exchanges and hosted students from South Korea nearly every year of his involvement.

Closer to home, in 2013 Hodshire pioneered an after-school initiative at Prairie Ridge Elementary School in Kalamazoo, with the goal of teaching students about Chinese language and culture. Students in the program learn the basics of the language, as well as songs, poems, games, and other activities that foster cultural appreciation. “I am an advocate for learning any language or culture," Hodshire remarked in a 2013 press release. "One of my main reasons of picking Chinese over the other languages and cultures is simply because of its global presence in the world economy. I want Michigan kids, Kalamazoo in particular, to have the advantages. It is predicted that in 2020 Chinese will become the second most spoken language in the world, one notch behind English."

An Advocate for Public Health

Beyond these pursuits, Hodshire also uses his skills as an advocate for public health. Motivated by the challenges brought forth by COVID-19, Hodshire is responsible for the donation of over 15,000 surgical masks to healthcare providers in the city of Kalamazoo. Thanks to his experience serving as international dignitary, Hodshire reached out to his contacts in Chinese government, who were able to connect him with the China General Chamber of Commerce USA, a non-profit organization based in New York. Hodshire’s connection with the organization culminated in an incredible success, as they donated 5,000 masks to WMed Health, 5,000 to Ascension Borgess and 5,000 to Bronson Methodist Hospital. “I felt the desire to contribute, to help out in any way possible,” said Hodshire. “I just thought I couldn’t sit back and do nothing.” 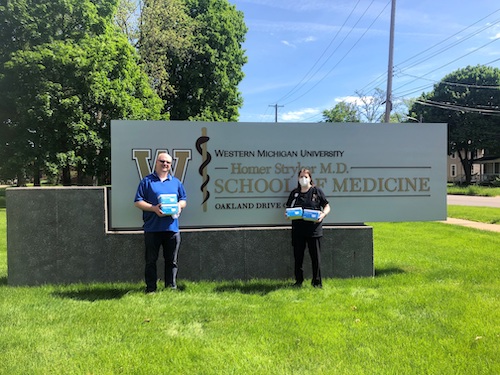 Hodshire’s ambitions, however, do not stop there. Aside from his contributions to academia and community advocacy, he has also made a name for himself as a screen actor, starring as an extra in several TV shows and films. Hodshire has been featured in a variety of productions, including the legal drama series “Chicago Justice”, short films such as “Choices” and “René”, and in the blockbuster action film “Real Steel,” just to name a few. He was even featured in the award-winning documentary “Who Let The Dogs Out” which premiered in 2019.

Although we can’t predict what will come next for Hodshire, we’re sure he will continue to amaze us. His career represents a key aspect of what makes the WMU community great: a sense of motivation, curiosity and advocacy. Regardless of the paths we take, our students, staff, and alumni have the tools they need to make an impact, both on campus and beyond. We’re proud to call Hodshire a member of the Brown and Gold family, and we know his career will continue to inspire all of us at WMU.