Alumni Spotlight From High Above

John L. Wagner (B.S.’59), photographer, pilot, and author, spent years documenting all of Michigan’s 100+ lighthouses, from the sky. You can see them all in his masterfully assembled book, “Michigan Lighthouses, An Aerial Photographic Perspective.”

John says the self-published book has sold more than 15,000 copies and he has about 1,000 copies remaining from the second (and last) printing.

At age 85, John still flies and owns two airplanes, a Cessna 172, from which he does aerial photography, and a twin-engine Beech B95A Travel Air.

The story begins in 1957, when John was a student at WMU…

In October 1957, fellow Delta Upsilon fraternity brother, Frank Hagerman, invited me to travel with him to the Plainwell Municipal Airport and meet Lester Zinser, Director and Chief Flight Instructor of Western Michigan University's flight training program. On February 3, 1958, I began flying an 85 Hp. Piper J-5 on skis. In June 1958, I completed the private pilots check ride.

Today, I hold an Airline Transport Pilot (ATP) Certificate with single engine land (SEL), multi-engine land (MEL) and single engine sea (SES) ratings. I have accumulated some 9000 hours of flight time and own the Cessna 172 from which the Michigan Lighthouse photographs were taken.

I gained a working knowledge of photography through self-study and “hands-on” experience, and later in courses at Lansing Community College. I expanded my area of expertise to underwater photography while working as a diver with the Research Division of the Alaskan Bureau of Commercial Fisheries, Brooks Lake, Alaska, part of the U.S. Fish and Wildlife Service. I obtained a seaplane rating in Juneau in 1959. Aerial photography has been a natural adjunct to my aviation career, which involved aircraft sales, Part 135 Air Taxi and corporate flying. 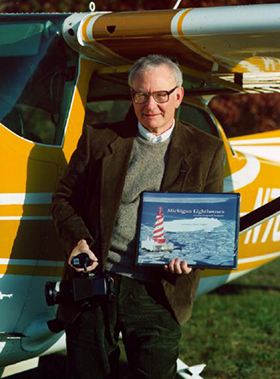 John began the Michigan lighthouse series in late 1985 as an incidental photographic interest and continued it with heightened enthusiasm and singleness of purpose in 1986. In 1989, the concept of a book unfolded. To prepare for publication, further photographic work to include all of Michigan's lighthouses, using primarily transparency film, was necessary. The first printing of the book, Michigan Lighthouses, An Aerial Photographic Perspective, occurred in January 1994, and was sold out in November 1996. A second printing was completed in July 1998. A traveling exhibit of aerial photographic enlargements has also been assembled that includes all of Michigan's 100 plus lighthouses.

For almost 26 years, John was employed as an Aviation Safety Specialist with the Michigan Bureau of Aeronautics and was involved with the inspection, licensing and often civic aspects of Michigan airports. He edited the Bureau's annual 312-page Michigan Airport Directory for 19 years and served one year as editor of Michigan Aviation, a bimonthly safety and events publication. He retired from the Bureau in 1997.

In addition to maintaining an ongoing historical record, the quest for more aesthetically pleasing images continues to take Wagner flying the waterways of the Great Lakes.

To learn more about the book or read about John’s adventures, visit his website at Michiganlighthouse.com.