Alumni Spotlight: From Waldo Library to the Library of Congress | WMU Alumni Skip to main content

Alumni Spotlight: From Waldo Library to the Library of Congress

“From managing the production of billion-dollar budgets to assisting visitors to Capitol Hill, my WMU public administration degrees have provided a solid foundation for a lifetime of public service.” 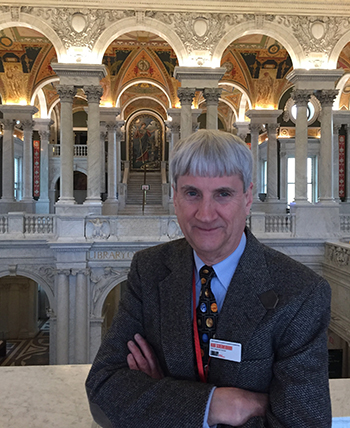 Mark Schermerhorn (B.S.’74; M.P.A.’77) knew early on that he wanted to work in the public sector, and after enjoying a long and wonderful career in municipal and state governments, he continues his public service as a volunteer for the largest library in the world.

After completing his undergraduate degree in public administration, Mark was encouraged by Dr. Leo Stine, who served as a political science professor and graduate college administrator and assistant dean, to further his education as one of the first students in WMU’s Master of Public Administration program.

“Dr. Stine was a big influence, even just in terms of human decency,” Mark recalled. “I was in an environment that recognized the tremendous value of public service.”

The Bay City native’s grand plan was to remain in Michigan, working in either Detroit or Grand Rapids, but as it would be, neither of those panned out, and Mark found himself moving to Maryland to take an entry level job with the City of Baltimore.

“Leaving Michigan was the most difficult decision, but I had to do it. Out of adversity comes new experiences that lead to personal and professional growth.”

And that turned out to be true, after working for the City of Baltimore for 20 years, and the Maryland Transit Administration until his retirement in 2009, Mark found himself in the federal volunteer sector.

In terms of volunteerism, Mark says what you do matters. Whether it’s a food bank or a V.A. Hospital, on the state or national level, volunteerism helps to provide a level of service above which an organization can provide within their budget. He says volunteers are not meant to replace paid employees, but to help enhance the quality of services provided to the public.

It began with a clinical trial at the National Institutes of Health. The experience was so moving for Mark that he decided to become a volunteer. For the next four years, he provided support to patients participating in medical research studies, largely helping them navigate the 360+ acre NIH Bethesda campus—which also happens to be the largest clinical research hospital in the world. Mark said it was all an incredible experience and he became friends with other volunteers, which led him to his next experience.

“I was having lunch with fellow NIH volunteers and one of their spouses was a docent for the Library of Congress,” Mark said. “As soon as she spoke the words, I knew I had to do it.”

After completing his training, Mark became one of 120 docents, serving as a Visitor Engagement Volunteer. In this role, Mark conducts congressional constituent, public, and VIP tours of the Thomas Jefferson Building. Aside from researching and writing the original tour covering the history, art, and architecture of the building, Mark welcomes and assists visitors and helps direct researchers, congressional staff, and special visitors to correct departments.

The library is home to millions of books, recordings, photographs, and newspapers, and is the research arm for the U.S. Congress and also houses the U.S. Copyright Office.  Last year, the Library of Congress saw 1.9 million visitors from all over the world.

“The Library of Congress is a five-star attraction,” Mark explained. “It’s interesting because at the end of the day, we are not a theme park, we are a library!”

While tourism is huge to Washington D.C., Mark says the sheer number of visitors to the library indicates people still care very much about the preservation of our history, the advancement of civilization, the dissemination of knowledge throughout the world.

It all ties back to Mark’s time as a student at WMU, some 49 years ago, when he found refuge in a different library.

“I always loved Waldo.” Mark recalled. “It served me well for my entire WMU experience, and I will always have a special place in my heart for it and the incredible people who work there.”

We love to hear from our alumni about what they’re up to! Share your story idea at WMUalumni.org/MyStory.