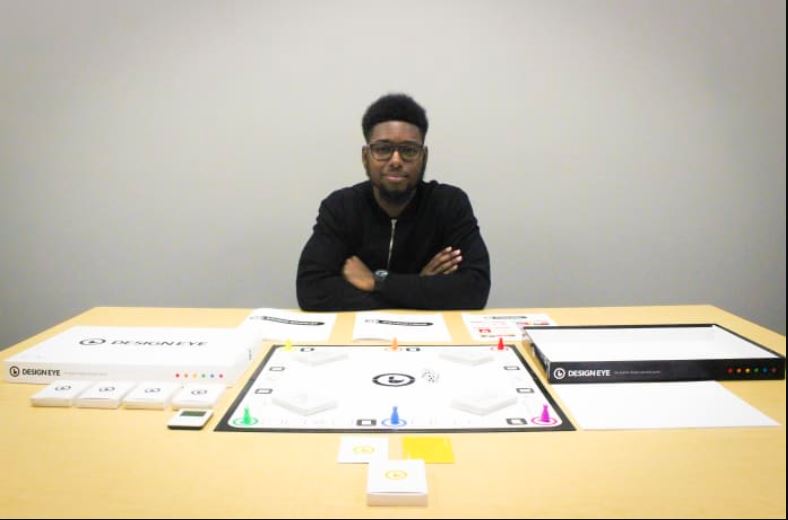 Deon decided in eighth grade that he wanted to be a graphic designer. Since then, he’s never failed to notice two things—that there were few African American graphic designers in his community, and that a lot of people don’t fully grasp what graphic design actually is.

“As it is with many industries, having a diverse and inclusive community is extremely important because it acknowledges and invites the genius of people from various backgrounds. For this reason, I wanted to create something that would solve this problem of the design world lacking diversity, especially in urban communities, but also of the general public lacking design awareness,” Deon explains.

Design Eye was born. The board game teaches players about the six main disciplines of graphic design: branding, print design, package design, experiential (or environmental) design, web design, and motion design. The object of the game is to compete for acceptance into a prestigious design school by creating a portfolio of work.

Deon credits his time at WMU in the Gwen Frostic School of Art, the Richmond Center for Visual Arts, and the professors of the graphic design program for shaping him into the designer he is today. He also acknowledges that his fellow students were instrumental in his journey, critiquing and helping each other along the way.

“Going to college meant making new friends, and I'm so happy to have met the friends I now consider brothers and sisters—people who I've worked and, for some, lived with for three years in the GD Program and, of course, still connected with even after graduation,” Deon said in an email. “College brought four of the best years of my life so far, and being with my crew at Frostic made everything that much more wonderful.”

Ultimately, Deon’s goal is to give back to his community, family and friends, WMU, Usher’s New Look, Boys & Girls Club, Detroit Public Schools, and as he says, as many people who are in need.

Read more about Design Eye and Deon’s campaign to make it a reality.