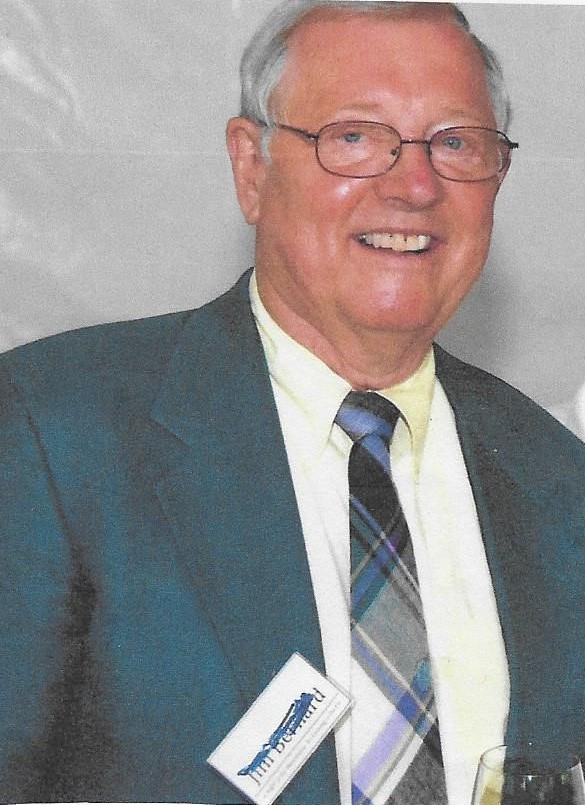 Jim Bernard’s recent and generous gift to WMU Baseball will provide scholarships for student-athletes to help them complete their degrees. He decided to give for several reasons, including to honor his late wife of 57 years, Barbara. This is his story.

Jim Bernard (B.S.’60, Political Science) has fond memories of his time at WMU, which became the launching pad for a successful career that took him from Kalamazoo to Richmond, Virginia, to Virginia Beach, to Philadelphia, to Washington DC, and finally to northeast Ohio where he retired early in 1994.

As a student, Bernard hit the ground running to get involved on campus. As a young man from a small high school in west Michigan, he appreciated the feel of (then) Western Michigan College.

“When I started, it was not a University, it became one my freshman year. It had an impact in terms of the prestige,” Bernard added.

Bernard became a member of Sigma Phi Epsilon, and got involved in campus politics, serving as Sophomore Class President and as President of the Men’s Union Board, which was the managing board for the University Center and University activities.

“The most important and influential circumstance was joining Sig Ep. I was just a typical freshman from a little town in a bigger environment. It was only because of a friend going through rush who said ‘come along,” Bernard recalled. “It’s where my dearest friends were, and our group stayed in contact with one another over the years. In the late 90s, we had a gathering back at Western, ‘Blast from the Past.’ We did it at least eight or nine times. The fraternity resulted in my first job out of college, and I’m still quite active with Sig Ep. It had the most influence on how my campus life went. It was a wonderful four-year experience and I made friends I still have.”

As a representative for the Sigma Phi Epsilon Chapter at WMU, Bernard was able to travel to Richmond, Virginia where the fraternity had its headquarters. It was there that he met Barbara, who lived next door in a nurses’ dormitory, on a blind date.

“One of the nurses came over and my friend answered the door. They struck up a conversation and he got a date with her. He told me about it and I asked him, ‘Why don’t you get me a date?’ She did, and we were married for 57 years.”

After Bernard graduated from Western, he traveled for Sig Ep for two years and because of the relationships he’d formed through the group, interviewed and landed a job with Aetna in the Corporate Benefits Program.

“It began in Richmond Virginia, I married a Virginia girl, and they were kind enough to let us select locations so I put down Richmond first or the Midwest. There’s an old saying that goes something like ‘you can take the Virginia girl out of the state but she’ll never lose her connection’ … Southern people want to stay south. So, we started in Richmond then Virginia Beach, then Philadelphia, and then Washington DC in management for 11 years, and then Northeast Ohio in 1985.”

In all, he climbed the ladder at Aetna for 30 years before retiring early in 1994.

“It amazes me how things worked out,” he said.

During that time, Bernard was active in his local community in addition to his ‘Blast from the Past’ group, where he had the opportunity to stay in touch with the happenings at WMU and to hear from various presidents about the University’s progress. They also carved out time to visit with current members of Sig Ep at WMU.

Through these events and personal connections, Bernard started to learn about ways he could give back. Connections like Fred Sitkins (B.S.’59, Industrial Arts), a frat brother who spent many years as a faculty member in the College of Engineering and Applied Sciences--and was also an active volunteer with fundraising efforts for Bronco Athletics. Additionally, over the years, Bernard got to know WMU Athletic Director, Kathy Beauregard. (Coincidentally, her father had been instrumental in the establishment of the Sig Ep Chapter at WMU, so they had a lot to talk about.)

“I felt like I wanted to do something, to contribute and in honor of Barbara. I talked to Kathy and she came up with the idea for an endowment, and that baseball was a great part of the athletics program where I could make a difference.”

Bernard, an avid White Sox fan who played baseball in his youth, liked the idea that he could help student-athletes on the baseball team get additional funding that could help them get their degrees.

“I thought, that’s a great way to give back”

The James R. Bernard Baseball Endowment will award about $1,800 in scholarship funds annually, with preference given to a player with ‘post-eligibility’ status, in other words, a player who is no longer eligible to receive academic financial support from the team, but has not yet completed their degree.

“I’ve always felt a lot for Western, just because the nature of the University, it has a real family appeal to it,” Bernard said. “Between the fraternity and campus activities, the Men’s Union Board, Sophomore Class President—I developed relationships that are like family relationships. It’s a very giving University.”