Logan Brown (B.S. ’19, Aviation Flight Science) believes the sky’s the limit when it comes to opportunities at WMU. Seizing those chances requires more than luck though; it demands active engagement.

“Get involved, any way you can,” he advised current students. “You cannot imagine the opportunities this place has for you. WMU prides itself on being a university of opportunity, from its admissions decisions to the opportunities students have once they step foot on campus. My story is no different.”

You could say Logan’s collegiate story began, or was at least spurred on by, a prestigious scholarship and a memorable WMU faculty member. Jane Baas, retired Lee Honors College Associate and Acting Dean, made a pivotal difference for him both educationally and personally.

Logan recalls the moment in May 2015 when he found out he’d been selected as a Medallion Scholar. “I remember being so excited, but then hanging up the phone and thinking to myself, ‘I hope they don’t find out I’m gay, so they don’t take it away,’” he said. “I got to WMU and learned I couldn’t have been more wrong.”

“I found a place where I was accepted and where I could be myself,” Logan added. “When Jane retired, I made sure to take a walk on campus with her to tell her that story. She proved to me that my opportunities were not contingent upon fitting into a certain box.”

In addition to the Medallion Scholarship, Logan benefitted from scholarship support through the National Gay Pilots Association, an organization he was introduced to at Western. In 2019, he was designated the Presidential Scholar in Aviation Sciences, an honor he earned despite an earlier disappointment.

Logan wasn’t awarded the Medallion Scholarship right away. “I was an alternate. While I was obviously thrilled to have the scholarship, this served as motivation for me during college,” he said. “Being selected by faculty as the most outstanding graduating senior in my program gave me a sense of peace that I’d proven myself worthy of the scholarship.”

Each year, the Presidential Scholar designation is the highest academic honor WMU bestows on undergraduates. Selection is not only based on a student’s academic excellence, but also their character, resolve and talent. Logan was a dedicated student who chose to not fly solo during his time at WMU. He put himself out there to guide and work with fellow Broncos for the betterment of the University.

During his first semester, Logan joined the Western Student Association (WSA) as a senator representing the College of Aviation. Eventually, he became student body vice president.

“I served alongside my fabulous friend and president, Chianté Lymon,” he said, “and we were able to represent and advocate for our students to the University’s administration. I attended my first WSA meeting because I was interested in government and wanted to get involved. One decision to attend a meeting led to the most impactful experiences of my collegiate career.”

Outside of student government, Logan was a member of Alpha Eta Rho (the professional aviation fraternity) and the WMU chapter of the National Gay Pilots Association. He volunteered frequently with Drive Safe Kalamazoo and gave back through Alternative Bronco Breaks, a Registered Student Organization (RSO), at the San Antonio AIDS Foundation.

“I was also fortunate to be a Zone Captain twice for Bronco Bash, and I ended my time on campus working as a flight instructor at the College of Aviation,” he said.

During his sophomore year in 2016, Logan received a special request from Jane Baas. She asked if he’d emcee the Lee Honors College graduation ceremony, and although he was nervous, he went for it. After the ceremony, a man walked up and handed Logan his business card, saying, “You may want this someday.” That man was Greg Sumner, a fellow College of Aviation alum and Medallion Scholar recipient, as well as a pilot with United Airlines.

Fast forward a few semesters and Logan wound up on a professional road trip with Greg, who convinced him to apply for an internship at United. “I was selected to be an intern in United’s Chief Pilot’s Office in their Washington, D.C. hub, filling a position with more than 300 applicants and only 12 spots,” he said. “It was one of the best summers of my life.”

Logan’s dreams took flight because he decided to take chances. “To this day, Greg is someone I look up to as a friend and mentor,” he said. “That relationship and my experiences as an intern were made possible from opportunities that came out of Jane asking me to emcee graduation.” 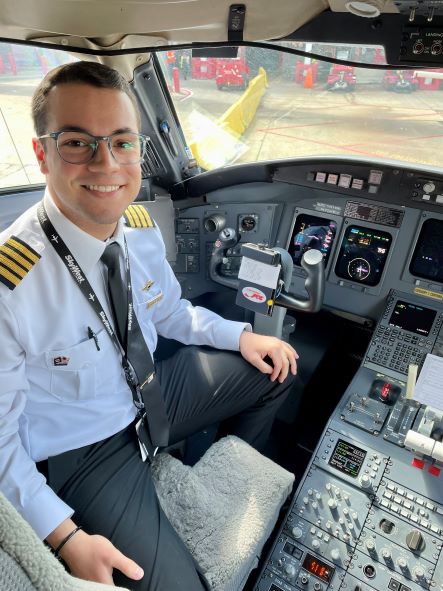 And to nobody’s surprise, Logan has continued to soar since graduation. Today, he's a captain flying the CRJ 200/700/900 out of Chicago with SkyWest Airlines.

If you have an alumni success story you’d like to share, submit it at WMUalumni.org/YourStory. We'd love to hear it!