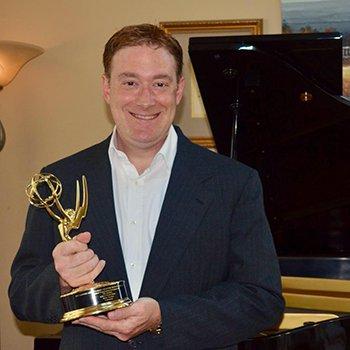 Composer and WMU alumnus Brian Katona (BMI) recently won an Emmy® Award for his musical score to the short documentary film,“The Builder.” Directed by David Kuznicki and written by Matthew Russell, The Builder tells the story of a 91-year old veteran struggling to maintain his grip on the past. The film also won the Emmy® for Best Short Format Program at the 49th Annual NATAS Lower Great lakes Emmy® Award Ceremony in Indianapolis.

Katona (B.M.’98, Music Education) attended Western Michigan University to study music and was involved with several performance groups. A typical music student, he spent many hours in the Dalton Center soaking up as much musical knowledge as he could.

“I was extremely honored to have worked with so many exceptional teachers,” Katona said in an email. “From Craig Arnold and Thomas Kasdorf, to Bill Appel, Richard O'Hearn, Steve Zegree, Phyllis Rappaport and C. Curtis Smith, to name a few, I was surrounded with amazing instruction that truly helped shape my career.”

After graduating, Katona said he used the solid ground he gained at WMU to build upon his craft year after year.

“My advice to current students would be to make the best use of the plentiful opportunities that are available to you,” Katona advised. “Don't be afraid to try new things, and always try to expand your horizons.”

The documentary can be seen here.

Commercial recordings: The Voice of Christmas: “The Night Before Christmas;” A Christmas Journey: “I Wonder What I'll Get for Christmas.”