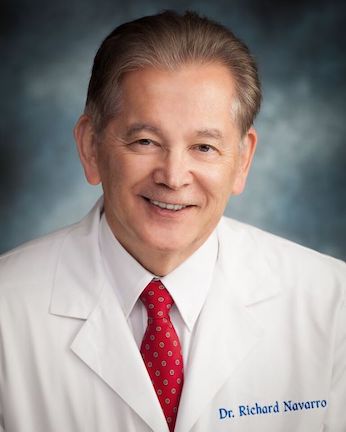 You’d think someone with 40 years of management and administrative experience, 14 inventions, four issued patents with two patents pending, and scores of professional publications and presentations would’ve been voted “Most Likely to Succeed” in high school.

Dr. Richard Navarro’s start (B.S., M.A. ’70-71, Speech Pathology and Audiology), however, was a bit bumpier. In fact, before climbing to the academic height of receiving his Ph.D. from Vanderbilt University, he was a high school dropout. “After dropping out, I worked in a hardware store,” he said. “My boss told me every day to go back to school, as I was ‘too smart to push a broom the rest of my life.’”

Thankfully, Dr. Navarro followed his boss’ advice. He took extra classes, went from flunking out to becoming an honors student, and graduated with his original high school class. Then he faced another significant barrier to receiving a college education.

“Since I came from a farm with six kids, we had no money for me to attend college,” he said. “I was thrilled when I qualified on the Michigan Competitive Scholarship program for an initial award to help with junior college. Yet I still worked third shift at a Mobil station and attended classes during the day.”

“I am the only kid from my family to graduate from college,” he added.

While at Lake Michigan College, Dr. Navarro took a course in speech correction, which led him to WMU. He was initially drawn here because of Dr. Charles Van Riper, a pioneer in the field of speech-language pathology and audiology, and founder of the Speech Pathology and Audiology program at WMU.

No Wasn’t an Option

The word “no” was something Dr. Navarro refused to hear or allow to defeat him. First aspiring to become a high school English teacher, he soon found a different calling: speech pathology and audiology. “My academic advisor in speech pathology at WMU initially advised me to choose another major because I’m hearing impaired,” he said. “However, when I took her course and excelled above everyone else in the class, she apologized to me and changed her mind about my success in the field. I always respected her for the apology and the courage to support me.”

Dr. Navarro’s support from WMU faculty didn’t stop there either. Dr. Albert Jetty, who had recently completed his doctorate in earmold acoustics, helped Dr. Navarro secure his first set of hearing aids through the Division of Vocational Rehabilitation (DVR). “I think now it was pretty obvious to everyone but me that I could not hear well,” he joked.

After a successful year in the speech pathology and audiology major, Dr. Navarro received a scholarship as a result of the department consolidating some grant funds. He was able to quit his night job, and with additional tuition assistance from the DVR, he could focus on his studies full time. During his senior year, he was named a Waldo-Sangren Scholar for his research in sound localization.

“I was able to accelerate the completion of my bachelor’s and master’s, so I was also awarded a fellowship for graduate work,” he recalled. “I received special dispensation during the spring session when I took 22 semester hours and was able to complete all my academic training (including my doctorate) in under seven years.”

Several of Dr. Navarro’s instructors went above and beyond for him during his time at WMU. This steadfast encouragement inspired him to continue pursuing his goals: “I remember working with Dr. Harold Bate (audiology professor) on my thesis and we discussed the idea of my earning a Ph.D. He said, ‘A doctorate is 5% intellect and 95% guts!’”

Outside of teaching for 17 years as a university professor, working as an audiologist for 52 years and doing missionary work with deaf children in Central America, Dr. Navarro has dedicated himself to a critical environmental cause. Today, he’s the Chief Executive Officer and Chief Innovation Officer of Renewable Ocean Energy, Inc., where he’s invented a revolutionary method to produce low-cost, reliable renewable energy on any water source—without sun, wind, batteries, tides, currents or a dam.

In short, he’s never let his hearing impairment stop him from doing anything, even fighting to resolve the hydroelectric energy crisis. His advice for current Broncos: “Accept everyone else and be kind! Don’t be intimidated when you encounter someone smarter than you. It will happen, so learn from them and teach them what they don’t know.”

You can support the next generation of visionary leaders by giving to WMU. Have an WMU Alumni story to share? Submit it at WMUalumni.org/YourStory.