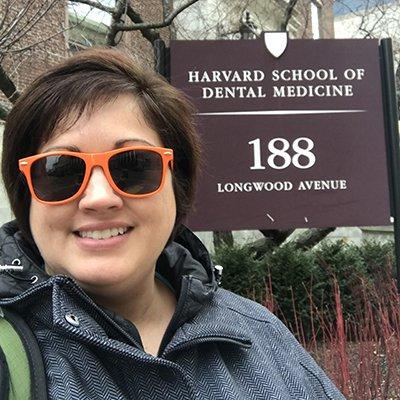 Becky Strong’s (B.S.’99, Nursing) career is working as a nurse, but she’s passionate about raising awareness about an issue very personal to her, and has even had an awareness campaign formed from her efforts.

In 2010, after 17 months of symptoms and visits to six different doctors, Strong was diagnosed with a rare autoimmune blistering disease known as pemphigus vulgaris.

“After diagnosis,” Strong recalled, “I was angry that I had to suffer so long to find a diagnosis and it took one special doctor to listen and to investigate deeply enough to find my diagnosis.”

Shortly thereafter, on a mission to learn more and connect with others like her, Strong attended the International Pemphigus and Pemphigoid Foundation’s (IPPF) Annual patient conference. It was at that conference that Strong heard the words that changed her life.

“A dentist from NYU made the comment ‘doctors and dentists are the experts in treating pemphigus and pemphigoid, but patients are the experts in living with it. Patients have the opportunity to share their experiences with their doctors and teach them what it is like to have it 24/7,” Strong said. ”I've spoken with this dentist and have presented with him many times, and he doesn't even remember saying the words that would change my life. In those words, I went from victim to warrior and survivor.”

Strong decided she wanted to speak with dental students to share her experience of what it was like living with a rare disease and got in touch with her dental provider, who was working at a major teaching institution. A few months later, Strong found herself at the Grand Rounds for the U of M School of Dentistry.

“More than 200 students hung onto every word and you could hear a pin drop,” Strong said. “The feedback from the students was phenomenal.”

So phenomenal, in fact, that Strong wrote an article for the IPPF journal chronicling her experience. It can be found here.

As a result, IPPF formed an awareness campaign and developed a program to take to dental schools across the country in an effort to help patients get diagnosed more easily.

“I've been invited and have spoken at universities such as Boston University, Indiana University, Tufts University, Western University of Health Sciences, New York University, Texas A&M and others, all while working as a nurse in the Detroit area,” Strong said.