First-Gen Alum Tom Coyne Has a History Worth Repeating 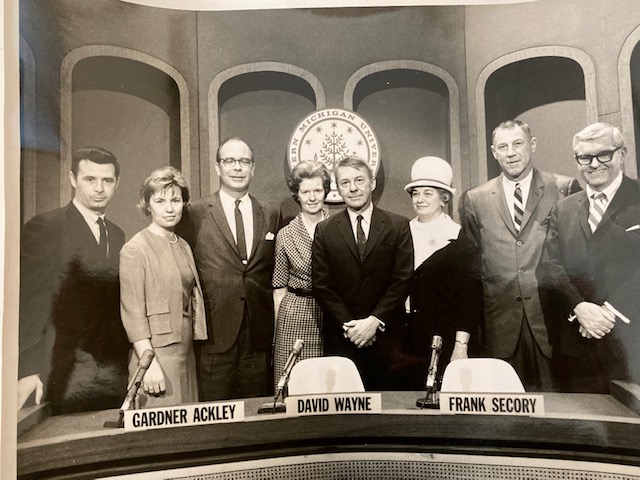 Thomas Coyne (B.A. '55, History) believes he would've been a productive citizen without a college degree, but with the aid of higher ed, he was able to elevate his career.

“With the B.A. and M.A. degrees, I was able to work at a higher level in one of the most important careers of all, the education and formation of young people,” he said, “and part of that was by accident. I had been Alumni Relations Director at WMU and the administrative assistant to President James W. Miller. Because of events that happened on campus and his direct observation of my performance as his assistant, President Miller appointed me Vice President for Student Services.”

“I did not have a Ph.D. or formal training, but what I had in the way of academic background and life experience opened the door for me,” Tom added.

After he graduated from WMU in 1955 and married his late wife, Monique (Jako) Coyne (B.A. '55; M.A. '66, French), Tom built on his undergraduate degree by earning an M.A. in History from the University of Michigan. He then worked as a purchasing agent in the paper industry and a sales correspondent in the construction industry, and eventually became the Alumni Relations Director at WMU. He retired from Western after serving as Vice President for Student Services.

Tom remains grateful for the opportunity Western Michigan University gave him to learn both inside and outside the classroom. “It was the totality of the experience; the professors, administrators, coaches, secretaries, team and classmates, and gentlemen who employed me as a part-time worker. I can’t stress enough that learning takes places outside the classroom for the student who gets involved.”

Along with being a Bronco, Tom also takes pride in being a first-generation college student. In his own words, here’s his first-gen story:

Mom and Dad were immigrants from Ireland in the 1920s. Mom was a farm girl from outside Castlebar, Co. Mayo, then and now the largest town in the County. Dad was from a little valley called Crimlin Valley outside the small village of Cornamona in Co. Galway. Mom always said he was from “back of beyond.”

They did not know each other in Ireland, but met in Chicago, Illinois. Like many Irish women immigrants, Mom was working as a domestic servant for a rich family in the Hyde Park area. Another young Irish woman was working as a servant in a neighboring house. She urged Mom to come with her to the dances being held on Saturdays that many Irish immigrants used to attend. Mom did, and Aunt Kate introduced her to brother Tom. The rest, as they say, is history. 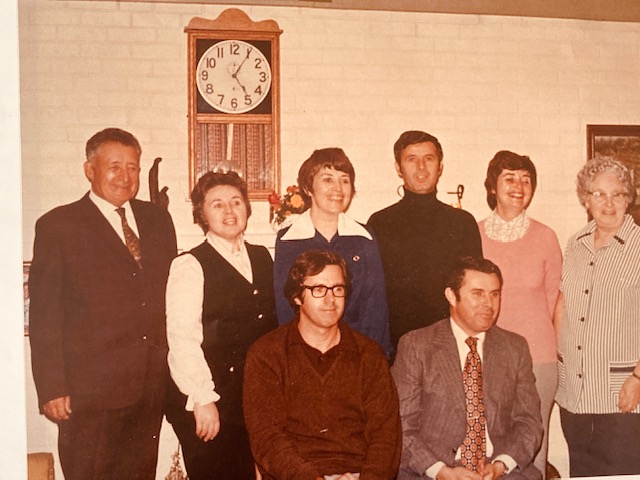 Once married, Mom did not work out of the home again. But she certainly worked hard within it, bearing six children (three girls and three boys), keeping house, and caring for a husband who worked as a sand hog building Lake Michigan water intake pods off the Chicago shore and, later, as a steel mill worker on Open Hearth furnaces in Indiana Harbor. After the family moved to a small subsistence farm outside Chicago just prior to World War II, Mom added milking cows, tending chickens, canning vegetables, spinning wool into thread and hours of knitting to her chores.

In Ireland, Mom had gotten to the eighth grade. Dad only reached fourth grade. In fact, he spoke only Gaelic until he went to school and learned English. However, like most Irish families, they greatly valued education and all six of us children went to Catholic grade schools and single-sex Catholic high schools. Since all of us started working at part-time jobs and saving our money, we were able to help with the tuition. On the farm we lived across 147th Street from the Midlothian Country Club and that proved to be a major source of income. The girls worked as waitresses or in the office and the boys were caddies.

Our oldest sister wanted to start working after high school, so she got an office position with the Burroughs Company in downtown Chicago. Next in line, also a sister, wanted to become a radiologist and went into a training program for that. I was next in the queue.

My high school was St. Ignatius College Prep in downtown Chicago. It was quite a daily trek from the farm to St. Ignatius, but a friend of mine’s father had graduated from St. Ignatius, and he was going. So, I took the entrance test, passed, and went, too. It was a fortuitous decision because St. Ignatius was and is one of the best high schools in the country. At St. Ignatius I was a member of the track and cross-country teams and that led me to Western Michigan College of Education in Kalamazoo, Michigan.

The summer after high school graduation I competed in a number of AAU road races in Chicago. When I won a five-mile road race, a champion race walker who was competing in a walking race at the same event asked where I was going to college. I had already enrolled at Loyola University, but he proceeded to tell me I should go to Western and that he would get me a full scholarship for tuition, room and board; plus, a job paying $50 a week. Although I had always thought that Kalamazoo was a fictious name like Anaheim, Azusa and Cucamonga (that comedian Jack Benny had made up), the offer was exciting. I applied and was accepted. I may have had a good high school education, but I also apparently ranked high in naiveite.

As it happened, a friend of my second oldest sister was attending Western Michigan College and he and his wife hosted me for a visit. I met the then basketball coach, Bill Perigo, and he kindly showed me around. Clayton Maus, the track coach, was away. 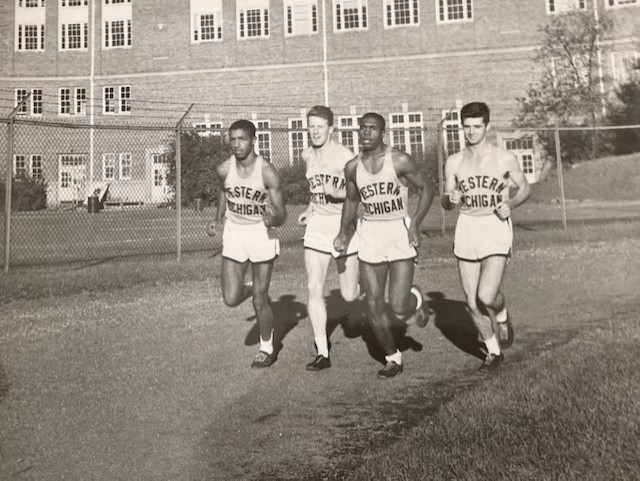 My bubble burst when I arrived on campus in September 1951 and met Coach Maus.

That competitive walking champion I met had no connection with Western and none of what he said he would get me was possible. The coach had no scholarships. However, he said he hoped I would stay and, since every student on campus was getting a State Board Scholarship which paid half the cost of tuition and he could get me a part-time job at a local sporting goods store, there would be some financial help.

I had liked what I saw of the Western Campus (1951 vintage), and I didn’t relish the thought of four more years riding the Illinois Central to downtown Chicago, so it was an easy decision to stay. However, I must admit, the first week I was at Western I was the most homesick guy you would ever see. I had only been away from my home one night in all the years previous. Plus, I was having trouble with the courses we were training on, and I remember writing home that I doubted if I would be able to make the cross-country team.

The world became a brighter place after our first meet when I came home in first place.

Western has been a shining light in my life ever since for even more and better reasons, not the least of which was when I first laid eyes on the beautiful French girl, Monique Jako, my wife to be. But that is a whole other story. 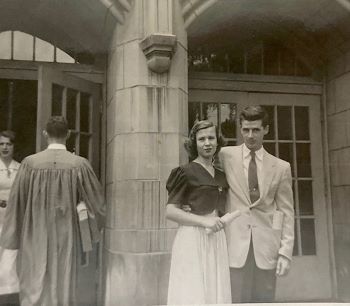 Now, for what you really want to know:

When I first enrolled at Western, I wanted to be a forest ranger. When I was told I would have to transfer to Michigan State Agricultural College after two years, I shifted to a general degree and majored in History, Spanish and Psychology with a minor in General Business. The instructors I had were excellent, but I often came to them by accident.

In viewing my class schedule that first semester, Coach Maus noted I had Dr. Margaret MacMillan for U.S. History. “She’s pretty tough,” he said. “Let’s shift you to this new guy, Stanley Idzerda.”

I should have been upset by his lack of faith in me and the fact I had just graduated from an excellent high school, but he was the coach. The move was one of the best things that has happened to me. I argued with Dr. Idzerda every class day for two semesters and never won an argument. I still consider him one of the finest and most challenging professors I have ever had.

In retrospect, I realize that one of the advantages we had in the 50s in our education was the size of Western. There were, I believe, only about 3,500 students on campus and we often had the same excellent professor for several classes. We got to know them and they got to know us. Learning became more personal and effective. In the larger university now, with less contact between student and professor, extra effort must take place for that to happen.

While I had always expected to go to college, I did not really appreciate the learning, both in and out of the classroom, that would take place. While at Western, a younger sister, Dorothy, and a younger brother, Jim, also enrolled. A number of years later, a last brother, Jack, came for his graduate degree in English. All of us received solid educational backgrounds and Dorothy went on for her Ph.D. at St. Louis University.

As mentioned above, learning takes place both in and out of the classroom. My part-time job, held for all four years, plus my summer jobs, kept me grounded about finances. Competing in athletics for Western and being a teammate was part of my education. For three years I was a Resident Assistant (RA) in Smith Burnham Hall. That responsibility helped shape me. Forever after, if a parent said, “I don’t want my son/daughter to have to work as hard as I did,” I always tried to persuade them otherwise. College/university students have more free time than high school students. Part-time work on or off campus, club participation or athletics, recreational or varsity, fills that time with constructive activity and teaches you how to function in society, take responsibility and be creative.

Our parents were proud of my siblings and me. They encouraged us and provided the home support. My Dad once told me, “My father was a farmer. I am a steel mill worker. I want you to be something even better.”

My father was a role model for me, as I saw how hard he worked to provide for his wife and children. Like our mother, he saw education as a means to do better. They both are responsible for all we might have accomplished.