You might think earning a bachelor’s degree in film, video and media services with a minor in graphic and printing science is atypical, but for one unstoppable alumna, this combination makes perfect sense.

Because Elizabeth Mays (B.A. ′11) is anything but typical. In fact, there appears to be no end to her drive, dedication and enthusiasm.

For starters, Elizabeth is a third-generation Black business owner and the CEO of MAYS Multimedia, a printing, graphic design, business consulting and marketing strategy firm based in Detroit. In 2018, Elizabeth relaunched Valley Publishing Company (VPC), originally founded by her grandfather in 1946. (Now a legacy division of MAYS Multimedia, VPC helps authors, writers, creatives and illustrators publish books, magazines, and other intellectual properties.) She’s also Editor in Chief of the Greater Detroit Area’s Entrepreneur and Executive Magazine and a voice-over artist.

These are only some of the professional accomplishments she’s garnered since graduating from WMU.

Elizabeth followed in the footsteps of her father, Professor James C. Mays, who graduated from Western Michigan University with a degree in printing management in 1977. “My father convinced me to minor in graphic and printing science,” she said. “He said, ‘Get a degree in the family business. You never know, you might need it.’”

Both the College of Arts and Sciences (CAS) and the College of Engineering and Applied Sciences (CEAS) helped fuel Elizabeth’s passions and success. At the CEAS, Professor Emeritus Dan Fleming and Master Faculty Specialist Lois Lemon particularly stood out.

“Their teaching styles really resonated with me,” she said. “They were both experts in their field, but they knew how to tell a good story, too. I think it’s critical that professors know how to not only keep the attention of their students, but also do it in a way where they enjoy listening to, learning and retaining the information.”

Due to some challenging life circumstances, Elizabeth decided to shift her education focus early on during her time at Western. Her mother lost her sight in high school and was diagnosed with MS. “I had wanted to be a pediatrician since I was a child,” Elizabeth said, “but I was coming home just about every weekend during my freshman and sophomore years to see about my mother and family and to help care for her. The biomedical sciences classes were difficult, and I started to have doubts; I wondered if I had what it took.”

Although she had to help manage her family’s household and her mother’s failing health, Elizabeth persevered. But what she went through made her reevaluate her goals. “I decided to pursue my other passion, which was entertainment and film,” she said.

Elizabeth vividly recalls her academic advisor, Marilyn Kritzman, guiding her down the hall in the CAS building to a large poster listing all the potential careers she could have with a degree in communications, majoring in film, video and media services. “It blew my mind, seeing there was such a wide spectrum of roles I could have once I left,” she said. “After that day, I believed even more that ‘anything is possible.’”

Elizabeth’s older sister, Della, also played a big role in guiding and mentoring her, and  reminding her of the importance of graduating within four years to avoid unnecessary debt. Each summer, Elizabeth made sure to secure an internship—first at MAYS Printing, next at CBS News in Kalamazoo and finally at CBS Radio in Ferndale.

“My sister enlightened me about credit-based summer internships and how I could gain hands-on experience, build my network, and most of all, graduate on time,” she said. “I remain grateful to this day for having a role model who showed me the value of taking advantage of education and every opportunity.”

While the chance to one day run the family business might’ve been somewhere in the back of her mind, Elizabeth never felt pressured to grab the reins. She did, however, basically grow up at Mays Printing, Detroit’s first African American-owned printing company founded by her grandfather, J. Caulton Mays. Elizabeth’s father was instrumental in helping his father elevate the company on a local and national scale.

“My grandfather and father were definitely role models, both as people and as successful entrepreneurs,” Elizabeth shared in a past interview with the Michigan Chronicle.  “They both taught me about having great business acumen, always respecting the art of what I’m doing, as well as respecting the customers.”

“It’s because of my grandfather and father that my hands have been stained with ink and my eyes have been destined for design,” she added.

Since running a printing business demands long hours, Elizabeth’s dad often brought her to work with him when she was a young girl. “I’d collate books and he’d order us pizza,” she said. “Over the years, I worked in inventory, production, customer service. Between 10- and 12-years-old, I was the janitor. I’ve pretty much held every role at the company at one time or another.” 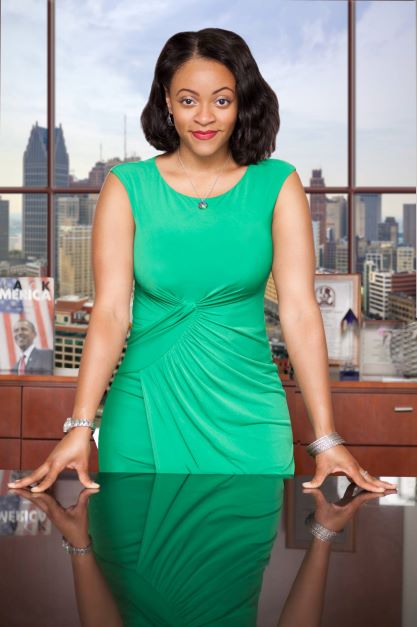 “Without that kind of work experience, I wouldn’t be where I am right now,” she said. “Dad was grooming me, and I didn’t even know it.”

Despite receiving multiple accolades, including Detroit Businesswoman of the Year from the National Association of Negro Business and Professional Women’s Club, Elizabeth considers working alongside her dad her most fulfilling achievement. “He files all my newspaper clips and articles or hangs my awards on the wall,” she said. “Having my father by my side as my coach and my cheerleader means the world to me.”

Elizabeth’s late mother, Janet L. Mays, Ph.D., endures as an inspiration in her life, too. Dr. Mays taught third grade in Detroit Public Schools for over two decades. “She was a huge humanitarian,” Elizabeth recalled. “I often ask myself, ‘What would Janet do?’”

A Commitment to Campus and Community

Philanthropy, whether giving time, talent or dollars, has always been important to not just Elizabeth, but her entire family. Her parents were no strangers to lending their hearts or their wallets to aid a variety of causes.

In 1996, her mom and dad rounded up over 300,000 books donated by Detroit Public Schools, regional libraries, Metro Detroit organizations and private individuals to ship to South Africa and Ghana. Along with Amway Corporation, Elizabeth’s parents sponsored this shipment valued at more than $100,000.

“They wanted to make sure those books got into the hands of kids who needed them,” she said.

As a student at WMU, Elizabeth volunteered with Big Brothers Big Sisters and at Vineyard Assisted Living. On campus, she was a media relations coordinator with the Campus Activities Board (CAB), which works to regularly bring quality entertainment to students on and off campus. “I took that role seriously and I learned a lot,” she said. “It gave me media experience that helped me in building my career.”

That tradition of giving back continues for her today within her beloved hometown of Detroit. She is active as a committee member for the National Black MBA Association (NBMBAA), American Institute of Graphic Arts (AIGA) Detroit, Detroit Symphony Orchestra and Girls Destined for Greater Mentoring Group. A graduate of the Goldman Sachs 10,000 Small Businesses Program, she has also lectured at Notting Hill College in Cairo, Egypt, at the invitation of the U.S. Embassy (Cairo) and the Arab Academy Center of Entrepreneurship.

Volunteering with or otherwise supporting a nonprofit is something Elizabeth wholly recommends current Broncos do. She also advises that students allow people around them to give them a leg up. “Don’t let your pride get in the way,” she said. “Let people help you, especially if they have a genuine interest in you.”

One last piece of wisdom she offers: embrace Gen Ed. “When you’re considering a major, exhaust your choices,” Elizabeth said. “Be present in your general education classes. They open your mind and expose you to so much.”

Have an alumni success story to share? We’d love to hear it! Submit one at WMUalumni.org/YourStory today.