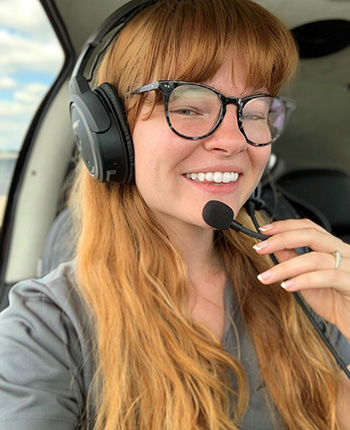 Melanie Hight (B.S. Aviation Flight Science) was in the middle of her flight training at WMU when unexpected circumstances threatened to stall her progress—permanently. Fortunately, she didn’t have to, because the answer came in the form of scholarships.

“I was told that there would be essentially no way for me to continue paying for my flight training, not even with borrowed money,” Melanie said. “I spent some time panicking, and trying to accept the very real possibility that I would have to give up on my dream. After that subsided, I decided to try and do something about it, so I began applying for scholarships. A lot of scholarships.”

Melanie received the Daniel L. Van Dyke Memorial Scholarship, which awards two students with $25,000 each. As a result, she was able to complete her degree, a dream that, oddly enough, began in a bowling alley during her senior year of high school when her dad was on a bowling league.

“After school, sometimes I would go watch him bowl,” Melanie said. “The bowling alley was located directly next door to the airport, so when I got tired of watching my dad bowl, I would go out back and watch planes take off and land. Every once in a while, a Cessna would do some touch-and-go's, but what was really exciting was when the occasional jet would take off or land. That's when I got bit by the bug, as it were.”

Now, Melanie is happily graduated, living in Virginia and working as a flight instructor for a certified Cirrus Training Center called OpenAir.

“There are a lot of people to whom I owe my success,” Melanie said. “I am so grateful for Brenda Thomas, a financial aid advisor on campus at WMU who deals with the aviation students. Brenda was so helpful throughout my whole experience at Western. There were several times where I had thought I was going to reach a dead-end financially, and she was always there. She always pulled out all the stops to get me the answer I needed.”

Melanie also noted Rob Bunday, a flight instructor who became her personal mentor and was the one who inspired her to apply for scholarships.

“He was also an incredible resource for my questions about my training, and aviation as a whole. I learned so much from him, things I still use to this day.”

In terms of other students facing the prospect of leaving their degree program due to financial difficulties, Melanie says Don’t Give Up!

“Apply for scholarships,” she said. “And don't stop applying for scholarships. Even the ones that seem small, because they add up. And network! Speak with your peers, and your teachers and mentors. If you don't have a mentor, find one! The more people you talk to and tell your story, the more of a network of support you will have when you need help.”

Speaking from her personal experience, Melanie said the support she received from the College of Aviation was unlike anything she could have anticipated.