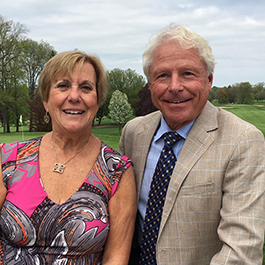 Dr. Charles (B.S.’72, Biology) and Mrs. Lucy (B.S.’71, Biology) Caldwell met at Western Michigan University while riding the campus bus and both graduated from the Department of Biological Sciences. After Chuck finished dental school and his orthodontics certificate, they moved to Grand Rapids to open an orthodontist practice.

Lucy did research at the University of Michigan and University of Minnesota and worked for several years in microbiology at Bureau of Laboratories for the State of Michigan. Upon moving to Grand Rapids she worked at Feting labs doing food microbiology. When Feting Labs closed she began her work volunteering in the community. For decades, both have served their alma mater and local community by giving financially and volunteering.

Forty years after making their first gift back to WMU, the Caldwell’s established the Charles and Lucy Caldwell Endowed Biological Sciences Research Award through their estate. The award will allow more undergraduate Biological Sciences students the opportunity to get hands-on research training with faculty mentors.

Through research opportunities, students form a bond with their faculty mentor and because of Charles and Lucy, generations of students will have this experience during their time at WMU. The fund will live on in perpetuity as a legacy dedicated to Dr. and Mrs. Caldwell.

“Students working in our research laboratories learn to apply their knowledge of biological concepts to solve real world problems, to think critically and to communicate their findings to their peers and to the general public,” said Biological Sciences Chair Dr. John Spitsbergen. “There is no better training for success!”

Charles has also held many leadership positions in public service as well as organized dentistry. He is a past president of the West Michigan Dental Society, the Grand Rapids Rotary Club and Indian Trails Camp. He has volunteered with the Boy Scouts, the Girl Scouts, the Grand Rapids Jaycees, Junior achievement and Blandford Nature Center. He co-founded the Baxter Community Center dental clinic, receiving the Golden Apple award from JC Penney.

Together the Caldwells received the EGR School’s Sheila Pantlind Award for their efforts to initiate the campaign to build a Fine Arts Auditorium for the school district. They also received the IKUS Lifetime Enrichment Award for their service to Indian Trails Camp and made several trips to various Central American countries to build and distribute water filters and provide dental treatment in the remote villages of those countries.

Now retired, the Caldwells enjoy spending time with their children and grandchildren, traveling, and many outdoor activities.