Matthew Sape’s Career is Already Off to a Flying Start

Matthew Sape is from what he calls “a little town in the middle of nowhere.” That town, Linwood, MI, is about 10 miles east of Lake Huron.

Living in a bigger city like Kalamazoo was an adjustment for this first-generation college student, but he’s navigated the change with flying colors. He’s glad he made the decision to pursue a degree in flight sciences through WMU’s College of Aviation. “I’ve had to pave my own way and figure it out as I go, but I’ve enjoyed being a student,” he said. “I worked as a roofer for three years before coming to Western and decided I’d had enough. I wanted to do something more interesting and less backbreaking and that paid more.”

Matt raced motocross growing up. Whenever he had a race near Battle Creek, he and his family also liked to take in the Battle Creek Air Show. Matt especially loved watching the fighter planes, and his curiosity about the flight industry grew even more when he discovered he had another relative who was a pilot. 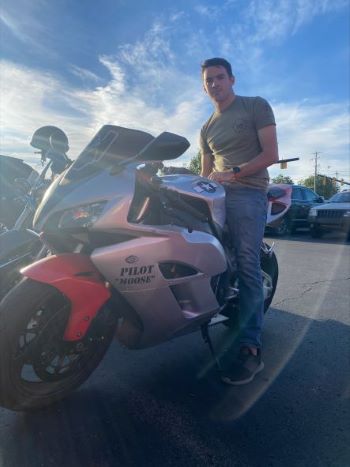 “My dad was a private pilot, but he never flew when I was a kid because that was back in the 70s,” he said. “Then a couple years out of high school I found out my cousin also flew for a Canadian airline,” he said. “When talking about what it’s like in the industry, he pulled out his phone and said, ‘Here’s a picture of my office.’”

That photo was a shot of the cockpit of a Q400. “There was the avionics and a hula girl on the dash, and through the window you could see snow-capped mountains,” Matt said. “I was like, ‘Yep, that’s what I want to do,’ and now here I am.”

While earning a college degree today comes with a hefty price tag—particularly in the field of aviation—Matt was fortunate to receive some financial assistance through the W.K. Kellogg Diversity in Aviation Scholarship. The W.K. Kellogg Foundation was instrumental in relocating the College of Aviation to Battle Creek in 1997. The Foundation has since provided grant monies to establish a world-renowned aviation program in Battle Creek, including grants dedicated to the outreach, recruitment and retention, and scholarships for underrepresented groups in aviation.

“Flight fees are super expensive. With flight fees included the cost of tuition this year alone was $60,000,” Matt said. “The scholarship I received went a long way in helping me cover those fees. I’m so grateful for the difference it made.”

In addition to doing well academically, Matt feels his biggest success so far has been his acceptance into the United Aviate Pilot Development Program. This initiative puts those accepted into the program on a fast track to a career at the airline. With the aim of hiring more than 10,000 pilots in the next decade, United is positioning itself to hire the best and brightest through the progression of Aviate.

“Because Western offers such great programs like this, I have a guaranteed job,” Matt said. “It’s pretty sweet, especially with the expense of the program, to not really have to worry about a job after I graduate.”

Over the course of its 80-year history, the WMU College of Aviation has grown into a world-renowned program with a prodigious industry reputation. With over 1,150 resident undergraduate students, the College of Aviation is recognized as one of the largest aviation programs in the U.S. and with its fleet of 28 Cirrus SR20s, is home to the largest flight school in the Midwest.