A Brief History of the WMU Alumni Association

On June 22, 1925, 425 WMU alumni, seniors, faculty, and staff were preparing the attend the Annual Alumni Banquet. The dinner and dance reception would be held in downtown Kalamazoo at the Masonic Temple (the building still stands near the corner of Rose and Eleanor Streets), and Miss Eleanor Rawlinson, an English professor, would serve as toastmistress. The music would be played by Fischer’s Orchestra. It would also be the night that the WMU Alumni Association began to be formed.

According to James O. Knauss in his book “History of Western State Teacher’s College 1904-29”, there had been two previous attempts by alumni to organize. In 1906, Maude Grill ’06 was the senior class president and was chosen to become president of alumni. Three committee members drafted a constitution, and in October of 1907, it was adopted and new officers were selected. Marion Sherwood ’07 became the new president.

At some point between 1910 and 1914, this organization ceased to exist for (now) unknown reasons. In July 1914, a campus newspaper reports that a new organization would provide the first opportunity in several years for alumni to gather on a large scale. In the fall of the same year, a new constitution was adopted and officers were elected, including Arthur C. Cross ’12 as president. In October 1915, new officers were elected and Almeda Bacon ’08 was chosen as president. The next reference of an alumni association doesn’t appear until 1925.

A Permanent Alumni Association
The July 1, 1925 issue of the Western Herald reported, “The splendid response which was given to the suggestion for such an organization was indicative of the interest among faculty and alumni alike in the possibilities of a working organization of all the alumni.”

The new plan rolled out included a constitution and bylaws which had been worked out by a committee from the senior class in conjunction with the student council and the administration. It was presented by John Clementz ’25. The committee’s first members were recommended by Milton E. Scherer ’25, retiring president of the Student Council: Charles Starring ’22, Chairman; Gretchen Switzer ’22; Rollan Maybee ’22; Ursula Eichenberger ’24; John Clementz ’25; and President Dwight B. Waldo, ex-officio

At the time, WMU had no dormitories. North Hall (then the Library) and the Men’s Gymnasium (now part of the Seelye Center) had recently been completed. Campus was growing rapidly, which meant the number of alumni would to. The group was charged with organizing the association immediately.

Alumni Magazine
From April 1938 to July 1942, the Alumni Magazine was published and contained news, editorials, a few photos, art work, and advertisements. The quarterly magazine’s subscription was $1/year or 25 cents/issue. At the time, more than 14,000 alumni lived in 48 states across the U.S. and in 11 different countries around the world.

President Ernest Chappelle ’16 stated in an opening letter of the first issue “…this project grows out of a felt need on the part of both the faculty and the alumni for some medium through which the items of progress and growth at Western and the news and achievements of alumni might be made known to all of Western’s large family and to the educational World.” 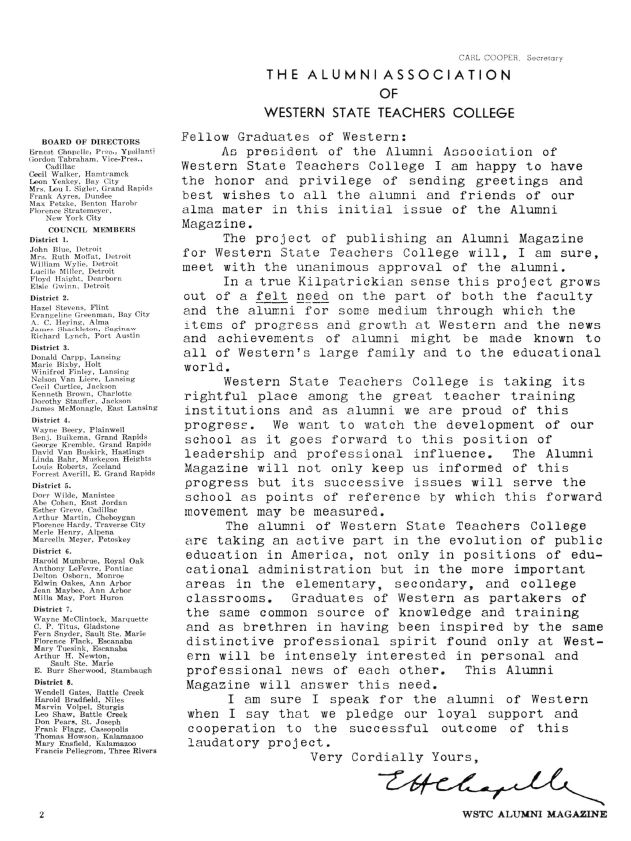 An editorial comment in the same issue reads “The editorial policy of this magazine will be to publish worthy accomplishments of its constituency. Please write us any time, for personal contributions, reactions, and criticisms are more than welcome- they are wanted.”

The magazine also reports that a $425,000 Union Building (later to be known as Walwood Union or Walwood Hall) would be ready for occupancy later in the year. Perhaps most interesting is the Alumni Association Reports, found on the following page: 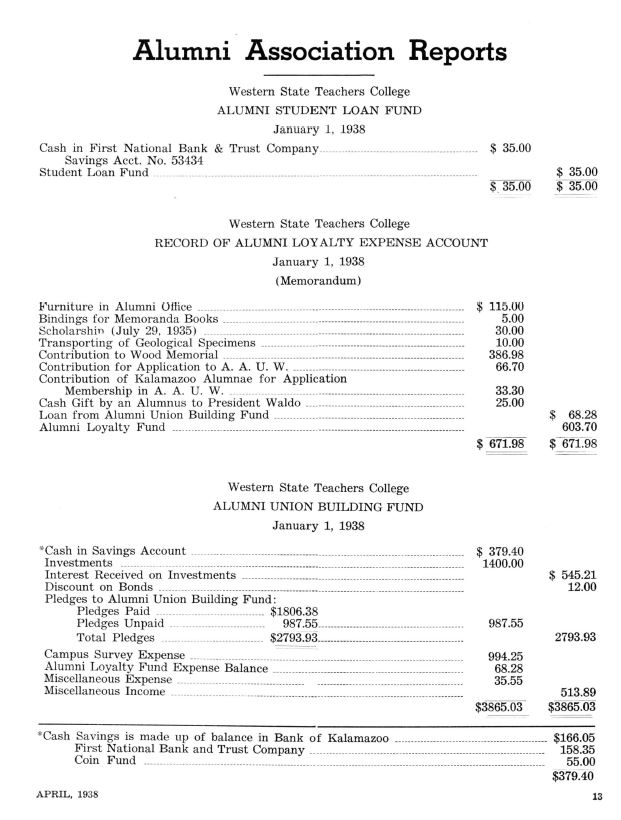 In 1941 (vol. 3, No.4), an address from Henry Ford, Jr., then president of the WMU Alumni Club, states “Here in Kalamazoo we have an active men’s alumni club which holds monthly dinners and meetings in Walwood Hall. This club has a scholarship fund of its own.” The fund was awarded annually to a student and was large enough to cover tuition, fees, books, and supplies. Ford urged alumni outside of Kalamazoo to form their own similar clubs in their respective regions.

Alumni, Student, and Faculty Magazine
In 1943, the Western Michigan College News Magazine began to roll off the presses. Noted in the second issue of the first volume, the magazine was a merger between the Educational News Bulletin founded in 1930 and the Alumni Magazine founded mentioned above, founded in 1938. Some iteration of a campus-wide publication has been in existence ever since.

Honoring Alumni of Distinction
Established in 1963, the Distinguished Alumni Award recognizes graduates of Western Michigan University who have achieved a high level of success in their chosen fields, who bring distinction to their alma mater through professional achievements. The first award was given to Arnold Pugno, a 1933 alumnus who had an elementary school named for him. As of 2018, more than 150 awards have been given to alumni representing fields from television to Broadway, entrepreneurship to research, and financial advising to executive leadership.

Supporting Alumni Family Members
Established in 1990 by the WMU Alumni Association, The Legacy Scholarship was established to honor multi-generational Bronco Family. Scholarships are available to the family members of WMU alumni, and awards incoming students $8,000 over four years and for transfer students $4,000 over two years.

MyWMU.com
Between 2010 and 2012 Alumni Relations and Development became one office and established a new alumni website, MyWMU.com. With this change, memberships dues for the Alumni Association were eliminated, and all alumni and friends of WMU were welcomed to MyWMU.