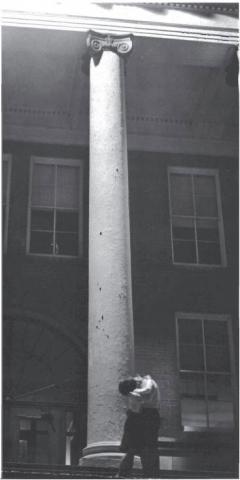 Campus may have been a bit quieter during the month of June because most students had left for the summer, but that doesn’t mean there wasn’t anything happening on campus. The Western Herald was on hiatus for the summer, but various articles from the Kalamazoo Gazette provide a glimpse into campus in June of 1965.

June 1965 brought a growth in international education at Western Michigan University, along with technological advances in the speech and hearing clinic.

“Meet the Timi of Ede”
“It was an interesting coincidence that the visitor at Western Michigan University should be from western Nigeria, because this summer WMU will train about 130 Peace Corps volunteers for duty in that West African nation.

The visitor is Alaiyeluwa Laoye I, who has a lifetime job as the timi of Ede, a district with about the same population as Kent County and a central city about the size of Grand Rapids.

In America, there is no exact political equivalent to the post of a timi. As Laoye described it, the job is a composite of a county manager, a circuit judge, a community relations director and a parade marshal.

Some of the Peace Corps volunteers at WMU this summer will be trained in the timi’s native language of Yoruba, a difficult tongue because of its tonal variations.

WMU President James W. Miller, who visited the timi with trustee Alfred Connable last summer, said it’s not certain where the volunteers would be sent. That’s up to the Nigerian education ministry."

“3 WMU Coeds to Attend Berlin Teaching College”
“Three Western Michigan University coeds who have never been out of the United States have been selected to attend the Berlin Teacher Training College during the next school year, under scholarships provided by the Berlin school.

The coeds are Zaiga Polis, Kalamazoo and Julie Watson, Royal Oak, both juniors, and Joanne Dioszegia, River Rouge sophomore. They have been granted the year’s study by the Berlin institution under an affiliation agreement with WMU. Three German students from the Berlin college are concluding a year’s study at WMU under similar scholarships by Western.

The Berlin teachers college is located in the western sector and its literal name is the Paedagogische Hochschule. It has 2,000 students who graduate with the equivalent of a bachelor’s degree."

“Electronics Being Used at WMU to Treat Stutterers”
“At Western Michigan University’s speech and hearing clinic, several machines are being used in the later stages of treating stutterers, most notably a delayed recording system and a sound-blocking buzzer.

The theory behind them, as clinic director Charles Van Riper explains it, is relatively simple: One of the things wrong with the stutterer is that he monitors his own speech by listening to it. He must try not to listen to himself.

"Most stutterers can talk better when they concentrate on the movements of the mouth. The machines teach control of the mouth,” he said.

Thus, if the stutterer can be trained to ignore the “auditory feedback” to his ears and pay attention to the “motor feedback” from his mouth, he can reduce his stuttering."

The images in this post are from the 1965 Brown & Gold Yearbook. Photo Caption: It is said that at Western a girl must be kissed under the lights of the old Education Building to become officially a co-ed. Although the Education Department has now moved to Sangren Hall the romance and tradition of the old east campus building continues.