One hundred years ago at WMU, several notable figures arrived on campus. While they may not be around any longer, their names can still be found around campus. 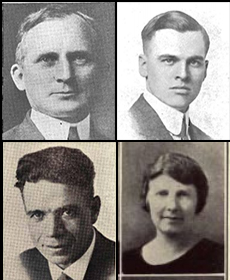 “The year 1919 brought Smith Burnham to the Department of History, Floyd Moore to economics, Herbert (Buck) Read to physical education, Fred Huff and Elmer Weaver to manual arts and Blanche Draper as editor of the Herald.”

Ernest /Smith Burnham Hall, along with the Burnham Dining Service, were built in 1948 and dedicated the same year for Ernest Burnham (top left), former head of the teaching department, and Smith Burnham, a well-known faculty member.

Moore Hall was constructed in 1962, however, it was not named for Floyd Moore (top right), but two sisters, Grace and Mary, who were longtime staff members. The Hall was originally a women’s dormitory.

Read Fieldhouse was built in 1957 and dedicated for the long-time men’s basketball coach, Buck Read (bottom left). He was coach from 1922-49.

Draper Hall was built in 1950 and dedicated the same year for Blanche Draper (bottom right), publicity director for 31 years. To this day, the building remains a dormitory connected to Siedschlag.

What you won’t find near campus any longer is a brick-paved Oakland Drive.

“The 1920s brought more and more traffic chugging up Oakland Drive to the campus. The road had been paved with bricks in the summer of 1919, with streetcar tracks laid along its west side. During rush hours, a streetcar passed every six minutes and every 12 minutes the remainder of the day. Buses ultimately brought about the demise of the streetcar system in Kalamazoo, and the tracks were torn up in 1934.”

Images are originally from the 1920 Brown and Gold Yearbook, Blanche Draper’s photo is from the 1930 edition.