Wood Hall: The Names Behind The Buildings | WMU Alumni Skip to main content

Wood Hall: The Names Behind The Buildings 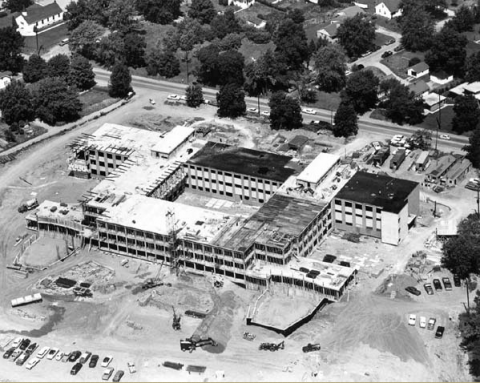 Wood Hall was dedicated in November, 1962 to Leslie H. Wood, a well-known geographer and former science teacher at WMU. Pictured above is Wood Hall during construction.

Leslie Wood was hired during the first session of Western State Normal School in 1904 by the institution's founding president, Dwight Waldo, to provide curriculum in the natural sciences. He did not begin teaching until the second term, however, as he was finishing up work on a fellowship in Chicago. He served in the Department of Geography until he died in 1933.

Larry Massie's "Brown and Golden Memories," recalls, "One Saturday morning, not long after the occupation of the administration building, Waldo called out Ernest Burnham, Leslie Wood, Thomas J. Riley, John T. McManus, and other faculty members who were handy with tools for a work session. It seems that the school had enough funds to purchase a supply of pine planks, but not enough to hire a set of carpenters to construct a set of stairs up the steep slope of Davis Street to the entrance of the new structure." (p. 17-18). 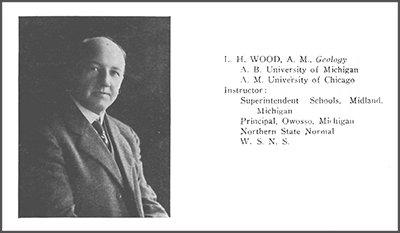 During his nearly 30-year tenure at WMU, Wood also taught Physics (which he was relieved from by Fox in 1906) and Chemistry (which he was relieved from by McCracken in 1907). He established the Faculty Science Club in 1918 with his assistant Leslie Harrison and nine other professors. Throughout the 1920's the club "delved into such diverse subjects as radio communication, astronomical explorations, sand dunes, dinosaurs, and remaking the map of Baffin Island," (Brown and Golden Memories). Pictured to the right is Wood in the 1919 Brown and Gold Yearbook.

His book, "The Physical, Industrial, and Sectional Geography of Michigan," was published in 1914 based on his field work. He also had a collie named Teddy that became "almost as much of a campus fixture as the trolley cars or cupola," (Western Magazine, Spring 1963).

The Spring 1963 edition of Western Magazine included the speech made at Wood Hall's dedication, "Mr. Wood was associated with Western in the years of its beginnings, when a building like this one seemed as unlikely as the Taj Mahal. The simplicity of those years and his own inclination led him to believe in getting along with what was available."

Wood Hall was originally a $3,500,000 classroom building made possibly by the Michigan legislature. It provided a housing for the Departments of Biology, geography, geology, mathematics, and psychology. It included a computer lab, the C.C. Adams Center for Ecological Studies, and a large greenhouse. Today, the 174,907 sq. ft. building continues to hold a large volume of classes in addition to housing labs and offices. Many departments and programs in the sciences continue to call Wood Hall home, in addition to the greenhouse. 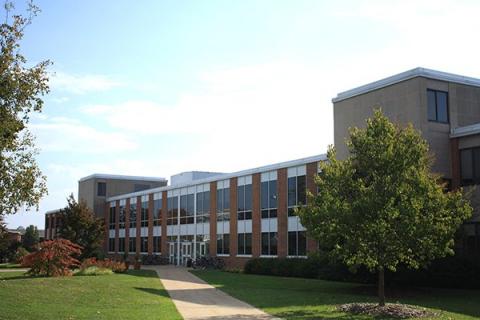