Zimmerman Hall: The Names Behind The Buildings | WMU Alumni Skip to main content

Zimmerman Hall: The Names Behind The Buildings 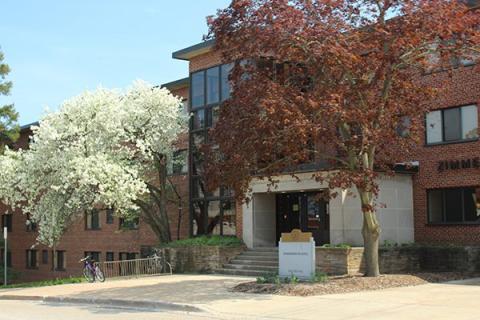 Zimmerman Hall was dedicated as a residence hall for women on October 21, 1955. Part of the “Little Three” complex, the hall is now a residence for upper-level students known as the second year experience hall. The hall also began welcoming men some time ago, and offers coed floors with suites assigned by gender. 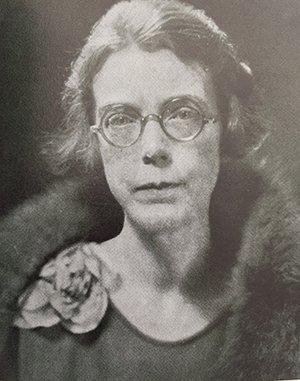 “During the more than forty years Miss Zimmerman taught at Western Michigan College her keen mind, her scholarship attitude, her vivid personality, and her deep interest in the welfare of the school won for her the highest respect and regard of both faculty and students. All who come in contact with her realized that she demonstrated in her life and in her teaching the enriching and ennobling power of knowledge, classical and modern, over the human mind and heart,” (Western Michigan College News Magazine, Vol 14. No. 1).

The 1940 Brown and Gold Yearbook’s section of the Foreign Language Department, then headed by Zimmerman, boasts the faculty’s travel experience, “The department is headed by Elizabeth T. Zimmerman and employs exceptionally well-traveled faculty. Most of it’s members have done graduate study abroad. Miss Zimmerman and Miss Steckelberg have studied at several universities in Germany…” Other faculty had studied in France, Rome, Japan, and Hawaii. 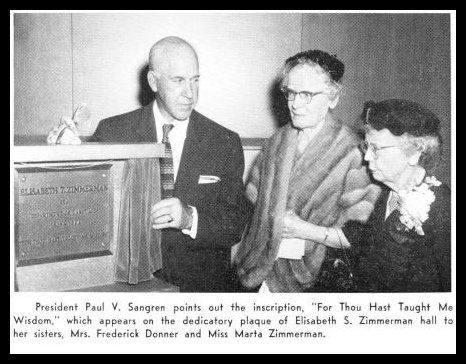 At its dedication, Zimmerman Hall had the capacity to house 300 women and featured a lounge with “oriental flavor,” which included Chinese vases and carved sculptures, a hand-woven Tibetan priest’s robe, a Chinese Imperial Banner, and Chinese Candlesticks. Other areas of the building featured draperies woven by the Fortuny Family in Italy, and color tones in greens, blues, and yellow-greens, with “complimentary coral for accents.”

A plaque reading “For Thou Hast Taught Me Wisdom,” was the final touch on the dedication to Miss Zimmerman. In the image shown, her sisters, Mrs. Frederick Donner and Miss Marta Zimmerman, are looking at the plaque with President Sangren (Western Michigan College News Magazine).