The Story of Heritage Hall 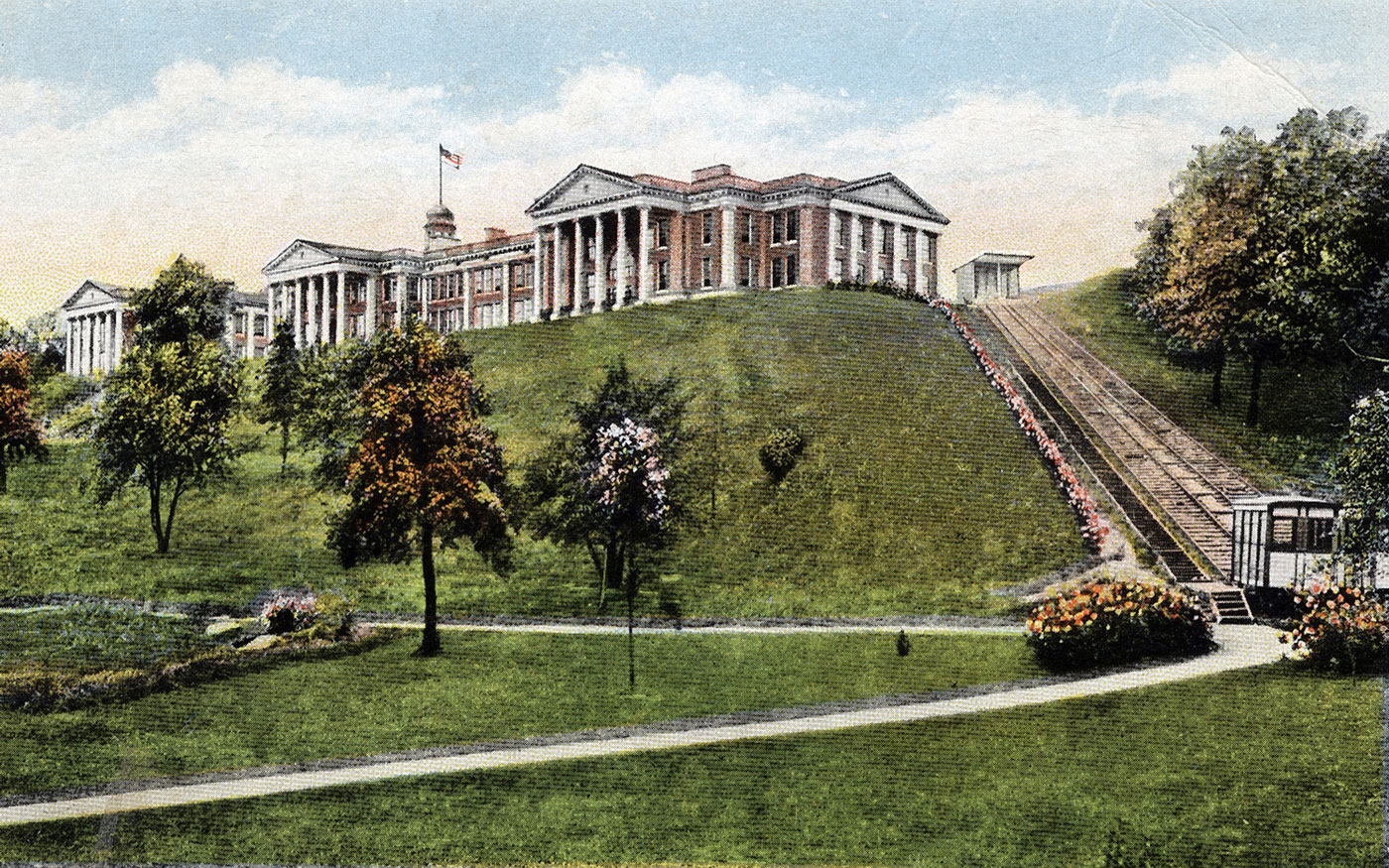 Western Michigan University’s location did not happen by accident; it was the community’s vision for and commitment to education that brought the school to Kalamazoo. The University’s original building—a highly visible landmark atop Prospect Hill—was erected to represent the integral ties between a proud community and its new school.

From its humble beginnings as a teachers college in 1903 through its transition to a global research university, Western Michigan University has called Kalamazoo its home.

In 1903, State Representative Henry Vandercook of Grand Rapids had a vision to create a new normal school, a school for training teachers, in West Michigan. He introduced a bill to the state legislature in the same year that allocated $30,000 to construct and equip a state-of-the-art school, granting an additional $7,000 for one year of staff salaries. It would be up to the State Board of Education to decide on an appropriate location for the new school; and that location would be responsible for providing the site and any additional funding for construction.

In Kalamazoo, it was the Press Club, an organization of active newspaper men from the city’s two newspapers, the Kalamazoo Evening Telegraph and the Kalamazoo Gazette, which took the lead in organizing the city’s bid. In June 1903, the Press Club pulled together civic and business leaders to organize a fund drive to secure the new school. At that initial meeting, Samuel Folz, then mayor of Kalamazoo, and Nathaniel Stewart, then president of the local school board, were selected to spearhead the fund drive and to identify suitable locations for the school within the city.

Because of their efforts, Kalamazoo was selected as the site for the new Western State Normal School in August 1903. To satisfy the financial commitments offered in the city’s bid, the citizens of Kalamazoo voted in a local Board of Education election and overwhelmingly approved issuing bonds of $70,000 to fund the new school.

With the funding secured, it became time to select a site within Kalamazoo. An ideal location was both required by the state, and desired by the citizens. As such, the Board of Education employed the same landscape architecture firm responsible for New York City’s Central Park and the grounds of the 1893 World’s Columbian Exhibition in Chicago, the Olmsted Brothers. Representatives from the firm traveled from Brookline, Massachusetts to assess several sites across Kalamazoo and settled on an area bordered by Asylum (now Oakland) Drive and Davis Street. The area, Prospect Hill, became the official home of Western State Normal School. 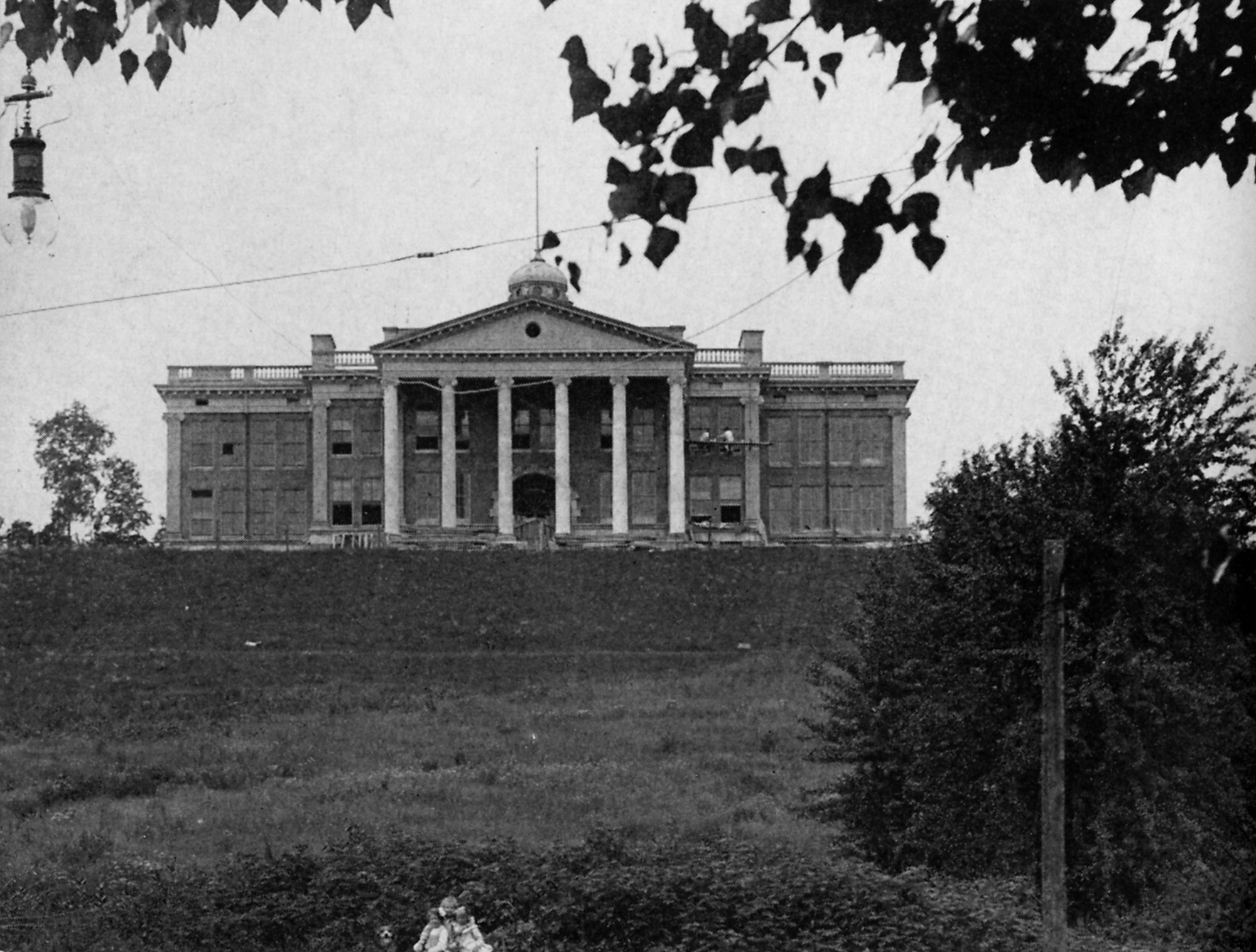 Construction of the school’s first building began in 1904. It would house administrative offices, classrooms, laboratories, and a library. The two-story structure clad in brick featured a portico with six Greek pillars, an arch window over the main entry, and a cupola which would serve as a beacon of public higher education for the community.

The building welcomed its first class of students in September 1905.

A Day of Great Celebration

On November 23, 1905, citizens and elected officials, including the Governor of the State of Michigan, gathered on Prospect Hill to dedicate Western State Normal School’s first building. As they looked out over Kalamazoo from the building, they witnessed stunning views of a burgeoning, bustling city. Those in attendance toured the new two-story structure and listened to speeches highlighting the community’s commitment to the pursuit of education and knowledge. For the growing city and the new school just beginning to drop its roots, it was truly a day of great celebration.

For more than a century, Western’s original building was used for academic instruction. It remained in use as a teaching facility until 1990, and then became home to art studios through the mid-2000s. Known as the Administrative Building, the Education Building, and finally by 1967 as East Hall, this founding structure has stood through four school name changes, eight school presidents, and every triumph WMU has celebrated since its grand opening.

In December 2012, the University announced plans for East Hall’s renovation as the new WMU Alumni Center. The project both affirmed the University’s commitment to preserve its birthplace and served to showcase the historical, robust relationship between Western and the community.

Heritage Hall, home of the WMU Alumni Center on Prospect Hill, became the new official name of the renovated structure by vote of the WMU Board of Trustees in July 2015.

While the building has been renovated to reflect current standards for efficient use, homage is paid to the University’s past throughout. Interior spaces are devoted to telling the story of WMU’s history, and many items from East Campus were salvaged for reincorporation throughout Heritage Hall; the fireplace from North Hall, now in the 1903 Room, the main stairwell railings (which were raised to meet code), and the restored east entry way door are just a few examples.

In addition to a ballroom with a seating capacity of 180, a library, café, public areas, and several conference rooms available for rent; the Office of Development and Alumni Relations occupies Heritage Hall.

Today, a dramatically renovated Heritage Hall looks out over the same community that gave Western Michigan University birth in 1903. The exterior may look and feel the same, but what's inside has changed—and will continue to change and evolve. The University's promise to its home community is that it will be both a faithful partner and a change agent for the city, region, state and nation.