Dennis Nally is the Chairman and Senior Partner of the US Firm of PricewaterhouseCoopers LLP, and a member of the US Board of Partners and Principals and the US Leadership Team. First elected as the Firm’s Chairman and Senior Partner in 2002, Nally was elected to a second term in 2006. Nally joined PricewaterhouseCoopers immediately after he graduated from WMU in 19741974 and became a partner in 1985. Having moved from the firm’s Detroit office to New York, he served in the National Office Accounting Services Group in New York for three years, before moving to Dayton as the Partner-in-Charge of PWC office there.

Prior to assuming his current position, Nally also served as the firm’s National Director of Strategic Planning, Vice Chairman with responsibilities for finance and key client service support, , and as a member of the US Firm Policy Committee and the US Management Committee. He was also a member of the General Council of the Worldwide Organization.

Nally has worked with many multinational clients in a variety of industries and he is a frequent speaker and guest lecturer on issues affecting the accounting profession and the US capital markets.

Nally is a member of the American Institute of Certified Public Accountants and the New York State Society of CPAs, the US Chamber of Commerce/Board of Directors, the Partnership for New York City/Board of Directors, The Carnegie Hall Society/Board of Trustees, The Business Roundtable, and the Diocese of Bridgeport, CT/Finance Committee. He also completed the Columbia University and Penn State University Executive Programs.

A 27-year veteran of ABC News, Jim Hickey has been an anchor and a correspondent for ABC News Radio since 1995 and is currently the National Correspondent for the ABC Radio Network. Hickey was in the anchor chair for ABC News Radio’s special coverage of the terrorist attacks on September 11th, and as National Correspondent has reported extensively on the war on terrorism. In 2005, Hickey won a Murrow Award for the Best Use of Sound in the network radio division. He has also been nominated for a National Academy of Television Arts and Sciences Award.

Prior to joining ABC News Radio, Hickey was a foreign correspondent for the ABC Television Network from 1980-1995. For ten of those years, he covered worldwide news events from his assignments in Germany, South Africa and Italy. Hickey worked at television stations in Philadelphia, Atlanta, Columbus, Georgia and Kalamazoo, Michigan. He was a Lieutenant in the US Army from 1970-1972 and was the Radio-TV Information Officer for Fort Benning, Georgia. He also was the action officer for the filming of Pentagon sponsored TV commercials introducing the All Volunteer Army (VOLAR). Hickey’s broadcasting career began as a freshman at WMU working for WIDR, WMU’s campus radio station.

He is currently the Chairman of the Communication Council at Monmouth, an advisory board for the university’s Department of Communication. Hickey received an Honorary Doctorate of Public Service degree from WMU. He has also been inducted into the School of Communication’s Alumni Academy and serves on the its External Advisory Board. 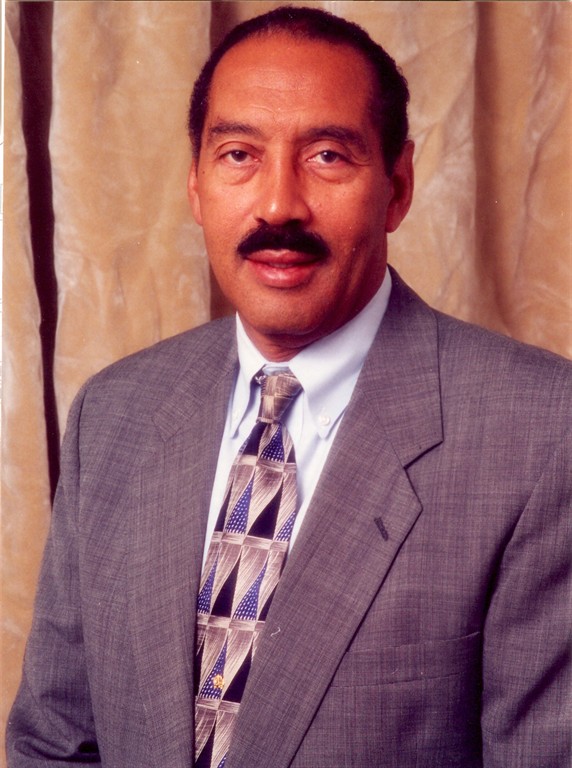 McKinley’s ability and skill as a member of the Bronco football team were acknowledged with his 1992 induction into the WMU Athletic Hall of Fame and his selection in 2005 to the WMU All Century Football Team. Upon graduation from WMU, he transferred his skill and love for the football to the sideline and spent the next 22 years in the coaching ranks. As a coach on both the collegiate and professional level, he was a member of many championship teams . His coaching career took him to Eastern Michigan University, USFL’s Oklahoma Outlaws and the University of Missouri as well as to North Carolina A & T and Prairie View A & M universities, where he also served as athletic director. Having sold insurance on a part-time basis for many years, in 1987 McKinley relocated to Florida and founded his company. Ten years later, McKinley’s business acumen and success was recognized with his induction into the into the Nova Southeastern University Entrepreneur Hall of Fame in 1997. In 2003 he was again recognized by the with his induction into the Broward/Palm Beach Junior Achievement of South Florida Business hall of Fame.

McKinley has remained active with his alma mater. He served on the WMU Alumni Association’s board of directors for six years, is an avid supporter of Bronco Athletics and has established permanent scholarships for the minority students in both the College of Education and the Haworth College of Business.