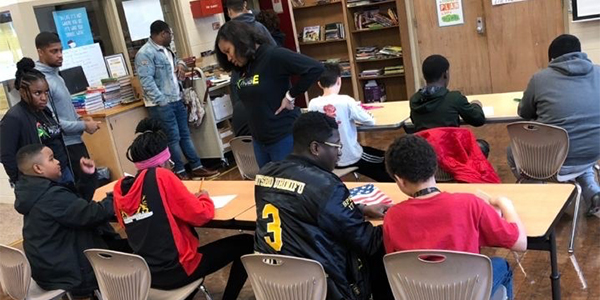 “They’ll get frustrated if they don’t get something right away. They’ll shut down and walk away,” says Erby. They can also be easily distracted, or feel compelled to talk about personal issues that are weighing on them. Learning algebra can be additionally difficult for a teen whose mom just lost her job or whose household is food scarce.

Connecting with their younger student counterparts has been a community engagement priority of NSBE for years. Along with after-school tutoring sessions, chapter members also now offer a free Saturday engineering program for middle schoolers. The assistance is not only rewarding and enriching for chapter members, but offers lessons that last and positive impressions for those receiving the help. The group’s engagement also helps struggling students of color see that learning and professional options are open to them.

“I wasn’t exposed to engineering when I was little,” says Erby, “especially those who looked like me. That would’ve been helpful.” For the students that NSBE members tutor and teach, “it really hits home when they see another student of color” attending college to attain careers in STEM-related fields, he says.

Erby, a fifth-year senior from Belleville, Michigan who is studying computer engineering, served as an NSBE tutor last year, and put in the effort to better understand the students.

His work and that of his fellow chapter members is paying off in substantial ways, he says. For instance, one student who was somewhat combative about learning and preferred to remain antisocial, was able to come out of his shell by the end of school year after working with Erby, who brought other struggling classmates to their table to learn.

Erby says NSBE members “want to see a change in students’ behavior as well as academics. I definitely see a correlation between the two,” he notes, with behavior and learning inextricably linked. Patience and empathy are necessary tutoring skills, he says, as are humor and the ability to inject fun into the visits.

Tutors are tasked with helping students tackle any subject area and with staying on track with projects. But on occasion, Erby says he tries a lighter approach by also introducing them to subject areas that are in his academic wheelhouse.

“Sometimes if we get our work done, I’ll say ‘hey, come check this out.’ I have an online simulator where I can show them the basics of coding,” says Erby, who has worked as a web developer and whose primary interest is software engineering; he hopes to one day produce plug-in electrical control units for race cars that would sync with laptops and mobile apps for fine-tuning; and develop Customer relationship management software for small businesses.

The tutoring is conducted at Kalamazoo Central High School. Students who have been selected by the school as needing extra help are paired with NSBE members. Erby says this school year, as many as seven are offering one-on-one tutoring three days per week. Supervising the tutoring program is Max Doggett, NSBE’s Pre-College Initiative chair.

For the second consecutive spring semester, NSBE is also hosting the Saturday Engineering Enrichment Program at Hillside Middle School. The series, supported by a $500 grant from Eaton Corporation, “takes on different features and skills of the different engineering disciplines and breaks those down into smaller projects with entertaining results, Erby says.

One 2019 SEEP project outcome taught participants how to use LED’s to light up with squishy circuits; the lessons illustrate the differences between series and parallel circuits, says Erby. Another project introduced physics concepts using a mouse trap car. Structural engineering methods were applied using marshmallows and toothpicks. Some of those same projects will be incorporated this year, and others added.

The projects are somewhat scaffolded so that some of the same materials can be used, and concepts built upon, to introduce larger engineering ideas. At the end of the program, students, which number up to 25, take a tour of WMU’s Floyd Hall, which houses labs filled with various scientific and technical equipment for College of Engineering and Applied Sciences students.

During last year’s campus tour, Erby says he showed them a formula race car, which he helped build as a member of the Formula Society of Automotive Engineers. “They thought that was pretty interesting. At that age, they get really excited” instead of intimidated by technical projects, he says.

For more information on Western Michigan University’s National Society of Black Engineers, or for those who are interested in volunteering to tutor with NSBE chapter members, contact Wesley Erby at wesley.c.erby@wmich.edu.