Valley II: The Names Behind The Buildings | WMU Alumni Skip to main content

Valley II: The Names Behind The Buildings 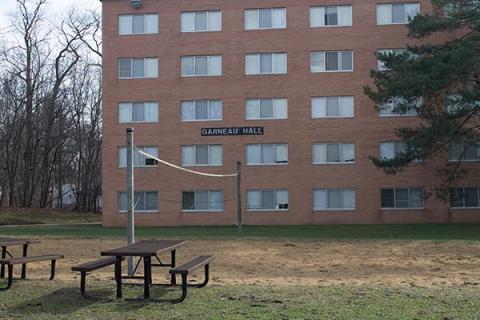 Originally known as North Valley Residence Unit #2, this set of buildings was renamed Valley II in 1965 when the entire area was dedicated in honor of former Physical Plant Director John Goldsworth.

Valley II, consisting of Eicher/LeFevre and Garneau/Harvey Residence Halls, opened in 1964 as the second of three similar units. Since then, thousands of students have called these halls home for a year, or perhaps more. But who were Eicher, LeFevre, Garneau, and Harvey?

Edith Eicher was an English professor from 1925 to 1954. The following information was featured in the Western Magazine (Western Michigan College News Magazine Vol. 13 Issue No. 1) in 1954. She taught rhetoric, the History of Language, the survey courses in English and American Literature, Literary Interpretations, and her “specialty,” Modern Drama, “which she built into one of the largest elective courses in the department.”

“Her scholarly attitude, her sane judgement, her excellent ideas as to the teaching of literature and language along with her readiness at all times to co-operate in the work of the department have made her a valuable and highly respected member of the English staff. But Miss Eicher's contribution to the growth of Western Michigan College has not been restricted to the teaching field alone. She has served on all sorts of committees, both those set up by the department and by the administration, as well as outside activities.”

During her tenure at WMU, Eicher traveled to Europe six times in addition to travel “far and wide in the United States and Mexico.” Always including collegiate study, Eicher attended Oxford University in 1932, The University of London in 1937.

“Miss Eicher will be greatly missed in the English department, but fortunately for Western and for her friends she is staying in Kalamazoo and participating in m an y of her former activities. She joined Mrs. Brown in giving a Tea for the new staff m embers of the English department; she has already, with her housemate, Miss Windsor, entertained The Language Club, and she is actively engaged in the work of the Women's Faculty Club. All this 1s as it should be- Miss Eicher has become a vital part of the life of Western Michigan College.” – William R. Brown http://scholarworks.wmich.edu/cgi/viewcontent.cgi?article=1041&context=wmc_news_magazine

Alice Louise Le Fevre came from Brooklyn to head the Department of Library Education in 1945.

An Entry for the Western Michigan School of Librarianship in the “The Encyclopedia of Library and Information Science: Volume 33” says “Miss Alice Louise LeFevre was selected as the first director of the new department… She arrived in 1945, spending the first semester organizing the department and planning and developing the curriculum. Classes began in February 1946, with two students and three courses... It speaks well for the efforts of Miss LeFevre and Miss Hunt that within approximately 2 years the program was accredited.”

Unfortunatly, Alice Louise LeFevre, died in May 1963 while serving WMU.

“In 1967, the University Library was doubled in size and the School of Librarianship benefited from this remodeling. An enlarged Laboratory Library was created, plus a seminar room named in honor of Miss LeFevre…”

Wallace Garneau earned a teaching certificate from WMU in 1935 and went on to become a theatre instructor and member of the speech department. He began teaching “Introduction to Radio Speaking” in 1941.

“Brown and Golden Memories,” by Larry Massie recounts some of Garneau’s activities on campus:

“In April 1943, the Players presented a musical production titled This is the Campus featuring such numbers as Irving Berlin’s Oh How I Hate to Get Up in the Morning, and This is the Army. Staged in the newly constructed, 350-seat theatre, (later called The Little Theatre and briefly Oakland Recital Hall) and written by theatre instructor Wallace Garneau, it parodied life on a wartime campus.”

While the cast was originally male and female, it had become all-female by the time of performance, as all the men had been inducted into the service.

The book also tells the story of how WMUK got it’s name, “When the college became a University, WMCR station manager Wallace Garneau realized those call letters were no longer appropriate. In 1961, when the opportunity emerged, Western’s radio station became WMUK-FM.


Leroy Harvey was a biology instructor and chair of the department. “Brown and Golden Memories” recalls that he often led the Grand March to begin dances in the Normal gymnasium, circa 1909. He was also offered the first WMU course in Grand Rapids, “Nature Study,” in a rented classroom in 1909 (WMU News).

The WMU Department of Biology website lists its history, stating:

“In 1908, the Department of Biology was formally established and Dr. LeRoy H. Harvey was hired and appointed chair of the new department. According to the 1908-09 Western State Normal School Bulletin, the biology department was accumulating “good working” equipment for this branch of science. In addition to Harvey, Catharine Koch was hired to serve as the assistant to the rural school courses. Between these two individuals, a total of nine courses were offered in the areas of botany, zoology, nature study, bacteriology, physiology and the elements of agriculture.” https://wmich.edu/biology/about/history

From the Nature Study Review, Vol. 9 (1913). “The Grand Rapids Nature-Study was organized in September 1912, much interest was manifested at the time of organization and this spirit continued throughout the year. The evening programs included five addresses by men representing different nature-study interests… And Dr. Leroy Harvey, Kalamazoo Normal. Two general excursions were a delight to all who participated… The second to the Fish Hatcheries in May, was conducted by Dr. Leroy Harvey.”

Today, Garneau/ Harvey Residence Halls host the Science Scholars and Magellan House, a community for students who want to explore everything WMU has to offer. A center for academic success with tutoring is also available.

Valley I: The Names Behind the Buildings

Valley III: The Names Behind the Buildings